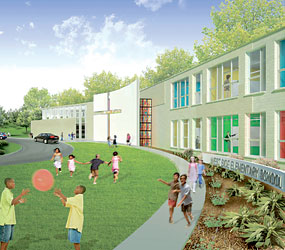 The school will open in fall 2010 on the campus of Seton Keough High School. It is designed to serve the west side of Baltimore City.

The archdiocese announced the consolidation of 13 Baltimore City and Baltimore County schools March 4. Students from some of those schools will attend Holy Angels. Thus far, 160 students have indicated an intent to register at the new school, according to Sean Caine, the archdiocese’s communications director.

Caine said a survey was conducted online to name the school, and that 42 percent of families from consolidating schools voted for Holy Angels.

“We think it reflects the spirit of Catholic education and how we feel as a Church about the children we educate,” Caine said.

When she was named principal of the new school in late March, Kathleen Filippelli said she wanted families to feel a sense of ownership.

“It will be very important to give the parents and all of the stakeholders of the new Catholic school an authentic sense of community,” she said. “Their choice of this new school and their sacrifice for Catholic education deserves to be recognized and validated by my invitation to participate in the mission of the school.”