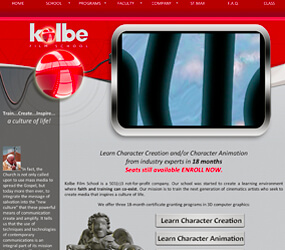 Well, maybe not a ring per se, but possibly an electronic chirp emanating from a computer speaker to remind students that class is about to begin.

The Kolbe Film School, named after St. Maximilian Kolbe, the World War II-era Polish priest and martyr, does all of its teaching online. That works in two ways. The small student body is far-flung, allowing for some economies of scale. And the students are using the computers not for just any kind of learning, but computer 3-D animation.

“I researched a little more about (St.) Maximilian Kolbe,” said Steve Baker, the school’s president and one of its instructors. “He was involved in radio, newspapers, and his main mission was to fight laziness of the faith. We’re going with that. I figured if he had access to a computer for television and film, he’d use it.”

Baker, in a Sept. 30 telephone interview with Catholic News Service from Arvada, Colo., a Denver suburb, said most uses of 3-D computer animation are “usually dark and culture-of-death related. It kind of emptied my heart. I kept hearing the church asking, or telling, us to use the new media to spread the Gospel.”

And so the Kolbe Film School was born.

Baker takes his mission seriously. The home page of the school’s Web site, http://kolbefilmschool.com, includes this quotation from an apostolic letter issued by Pope John Paul II in January 2005, shortly before his death: “The church is not only called upon to use mass media to spread the Gospel, but today more than ever, to integrate the message of salvation into the ‘new culture’ that these powerful means of communication create and amplify. It tells us that the use of techniques and technologies of contemporary communications is an integral part of its mission in the third millennium.”

“We’re trying to fight – take back the media,” Baker said.

Classes started Oct. 1. Students will get 350 or 700 hours of training in Maya computer animation software. Baker and Thom Faulter are the faculty for now; Faulter has some “VeggieTales” projects on his resume. Both are certified Maya instructors.

Baker’s background is in architecture. “When I started there was nothing like this for college; I studied architecture so I could learn 3-D modeling,” he said. “I learned it on my own and spent every day learning it.”

He added, “I’m actually a licensed architect in Colorado. Actually most of my work has been Catholic churches, but my heart has pulled me elsewhere.”

The student body is not huge – three, with a fourth sitting on the fence as the semester was starting – but the economics still work out for the Kolbe Film School.

“Two students, we break even,” Baker said, “but to live off it we need five or more. I look at another online school and they’ve got 200 or more enrolled every quarter.” Even so, he noted, “we’ve done absolutely no advertising but we’ve got three students.”

Baker sees a bright future for the school. “A future goal would be to build an actual, physical place,” he said, adding that he has conducted two-week summer computer animation camps for high school students each of the last two years.

“People are interested in learning how Pixar makes its movies,” Baker said. “We’re using the same technology and same software that they’re using.”

Is he eager to see the new 3-D versions of Pixar’s first “Toy Story” movies? Baker replied, “I’ve got four kids and a new 2-month-old. It’s hard to get out for two movies.”