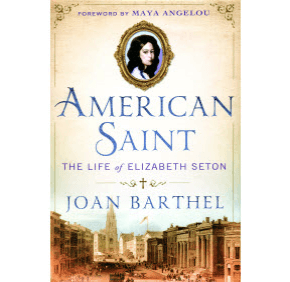 By Maria Wiering
mwiering@CatholicReview.org
In 1975, writer Joan Barthel submitted an article to an editor at the New York Times. The subject was Elizabeth Ann Seton, the first native-born American saint, whose canonization was slated for September of that year.
Barthel began her research associating the saint with what she called “boring” marble statues in church niches, but Mother Seton quickly fascinated her. Barthel told the editor she wanted to write the woman’s biography one day. To her surprise, a line at the end of the story announced that the biography was underway, due out the following year.
Nearly 40 years later, the biography is finished. “American Saint: The Life of Elizabeth Seton” (St. Martin’s Press) was released March 4.
Barthel relied on St. Elizabeth Ann’s journals and letters, collected by two Sisters of Charity, whose community Mother Seton founded in 1809 in Emmitsburg, where she is interred at the National Shrine of St. Elizabeth Ann Seton. The writings chronicled her life as a wife and mother, conversion to Catholicism and life as a religious foundress.
“She wrote with her heart wide open,” Barthel said.
Mother Seton was born in New York in 1774. Religious even as a child, she was raised Episcopalian in a wealthy family. In her New York, Catholics were poor immigrants. It wasn’t until she traveled with her ill husband to convalesce in Italy that she discovered the Catholic Church. Her husband died abroad, leaving her a widow at age 29 with five children.
St. Elizabeth Ann’s subsequent conversion alienated family and friends, and she left New York to teach in Baltimore, and later, Emmitsburg. Her worked attracted women interested in active religious life, and she founded the Sisters of Charity, the community she would lead until her death in 1821.
She lived by the motto “At whatever risk, yet go forward.”
The author hesitates to call Mother Seton a feminist, but said the saint boldly crossed gender-oriented boundaries when she needed to, such as opening a bank account for a charitable organization at a time when men handled financial matters.
“She was very much a strong woman,” she said.
Barthel compares her in the book’s introduction to present members of the Leadership Conference of Women Religious, who are in conflict with church hierarchy over their perceived doctrinal dissent on some matters. They claim primacy of conscience, something that St. Elizabeth understood well, Barthel said.
The first U.S. active sister, St. Elizabeth Ann has a connection to all American women religious, Barthel added.
“These women, since 1809 and counting, have given their lives to God – entirely, unconditionally,” she wrote in a follow-up e-mail to her Catholic Review interview. “Nowadays we see them on the street, dressed like other women, so we rarely stop and think about the overwhelming commitment they have made.”
A Catholic with 48 years of journalism experience and award-winning author of five nonfiction books, Barthel said she “over-researched” “American Saint,” which she began working on full time in 2004. She traveled to Italy, New York (where she has a home), Baltimore and Emmitsburg as she explored Mother Seton’s life.
Maya Angelou provided the book’s forward, calling the work “a map that allows us to follow the journey of this remarkable woman.”
“What’s so important to know about Elizabeth is that she was always aware of the presence of God,” Barthel said. “If anybody deserved to be a saint, it’s her.”
To view the book on Amazon, click here.
Also see:
Pope’s box, with wood from Baltimore basilica, puts religious liberty in spotlight, pope says
Mudslide takes couple’s home, but they worry more about the losses of others
PrevNext