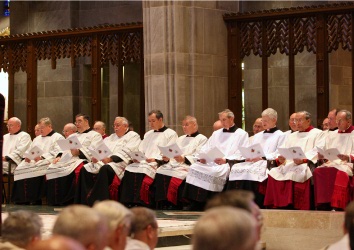 The men recently honored by Pope Benedict XVI with the title of “monsignor” are being recognized for being “totally available to the people of God,” Archbishop Edwin F. O’Brien told a capacity crowd March 7 at Cathedral of Mary Our Queen in Homeland.

Family, friends and parishioners gathered Sunday evening for a vespers service to bless the nine men who were named monsignors in January and one who was recognized with the church’s highest rank of monsignor. The celebration had been postponed from February due to heavy snow that fell the weekend it was originally scheduled.

In his homily, Archbishop Edwin F. O’Brien reflected on the reading from the vespers, a familiar passage from Paul’s first letter to the Corinthians, where the apostle talks about running a race.

“Were Paul speaking to this congregation today and certainly to our new monsignors, … he would thank them for staying in shape,” the archbishop said, “at least spiritually,” drawing some laughter from the congregation at the last part of the comment. He would thank them “for persevering, for the strength they have shown in their faithful witness to the Gospel in their own lives and in their preaching.”

Also at the prayer service, Monsignor Robert A. Armstrong, who retired at the end of 2009 after serving as rector of the Cathedral of Mary Our Queen for 25 years, received a credential designating him as a Protonotary Apostolic Supranumerary. He is the only archdiocesan priest to be conferred with that rare title; Protonotary Apostolic Supranumeraries are the highest-ranking non-episcopal prelates at the diocesan level.

Archbishop O’Brien said St. Paul would encourage each monsignor to further commit himself to the Gospel and thank them for the leadership they have shown in bringing others closer to a life of prayer and the Eucharist.

The monsignors had been “living and preaching and counseling in the midst of God’s people for these many years,” the archbishop said. “And the number of God’s people that have come out today to thank you makes that so clearly evident. To them you have been a shepherd, a father, a friend.”

He also praised the rest of the priests of the archdiocese. “The fraternity of priests is so important to the life and vibrancy of any archdiocese, any diocese. That fraternity is so strong here.” The honors given to the new monsignors enrich the whole community of priests.

“Every day, priests like you, without special honors except the honor of knowing and loving Christ… are working as diligently as any one of us would ever hope to do,” Archbishop O’Brien told the monsignors. “So in honoring you, our Holy Father and our church are honoring the whole presbyterate of the Archdiocese of Baltimore.”

During the prayer service, Auxiliary Bishop Mitchell T. Rozanski presented the monsignors by name to the archbishop and the assembly as each received his credentials from Archbishop O’Brien. Some of the parishioners who had come to honor their pastors responded when they were introduced with wild cheers and standing ovations.