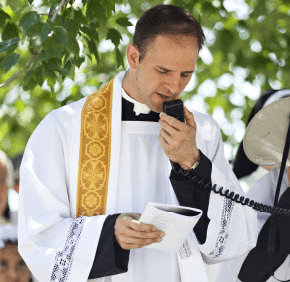 Father Michael A. DeAscanis remembers Father Raymond L. Harris pulling him aside after a liturgy in 1996 at Immaculate Conception, Towson.

He “challenged me to the priesthood,” recalled Father DeAscanis, who was a civil engineer at the time.

That conversation was an impetus for Father DeAscanis entering the seminary two years later. He was ordained a priest for the Archdiocese of Baltimore in 2004, and was appointed by Archbishop William E. Lori as the new archdiocesan director of vocations, effective July 1.

Archbishop Lori said Father DeAscanis has “been involved in raising up priestly vocations and religious vocations and has always had a very high priority in his priestly ministry and it’s something I came to know early on.”

“I was torn between the desire to serve the people and the privileges of helping young men discover God’s plan for their life,” said Father DeAscanis, 41, who called the appointment unexpected.

It is fitting that Father DeAscanis’ new residence is at Immaculate Conception, where the seed for his vocation was first planted.

There are currently 30 seminarians in the archdiocese, said Father DeAscanis, who is working to increase that number.

“We will give our best effort, but rely on God to bear the fruit,” Father DeAscanis said.

Six new men – ages 22 to 35 – are entering the seminary this summer, beginning their journey toward becoming archdiocesan priests.

“It is a very good sign,” Father DeAscanis said, noting that while not all are called to the priesthood, unmarried Catholic men should at least consider the religious life.

As vocations director, Father DeAscanis hopes to “foster that mindset in the archdiocese” with support from parents, youth groups, Catholic schools and religious education programs.

Archbishop Lori said “we all have to make it a big priority to raise up religious vocations because our priests, even with all of the excellent help they’re receiving from lay leadership, are really being stretched. It’s also important that if God is calling young people to the priesthood that we help them answer God’s call.”

He wants the number of vocations to “rise steadily.”

“It is really more a question of really radically opening ourselves up to God’s will and making it possible for anyone whom the Lord is calling to come forward,” Archbishop Lori said.

An obstacle to vocations is that many parents stand in the way of their children and a religious vocation, Father DeAscanis said.

A native of Wilmington, Del., Father DeAscanis is one of six children. Growing up, he attended Catholic schools.

“My parents never specifically encouraged the priesthood,” Father DeAscanis said, “but they challenged us to see God’s will for our lives.”

Father DeAscanis encourages Catholics to say a simple prayer: “Lord, show me your will for my life and help me to desire it.”

“If we could get parents to teach that daily prayer to their children,” Father DeAscanis said, “our marriages would be stronger and our seminaries and convents would be overflowing, and our single people would have a missionary zeal.”

Because half of all marriages in the U.S. end in divorce, Father DeAscanis said, there is a greater vocations crisis in marriage than in the priesthood.

“We can’t even agree what marriage is,” he said, citing the referendum on Maryland’s new same-sex marriage law that is on the November ballot.

“Many Christians today are not willing to give their future away to God or another person,” Father DeAscanis said. “We are tempted to take, rather than give. A Christian is called to imitate Christ, who literally gave his life away for us on the cross.”