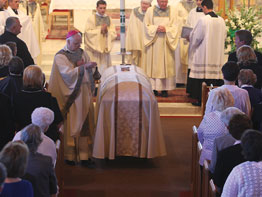 Standing in the sunlight in front of Father Kevin Brooksbank’s home parish of St. Joseph, Cockeysville, longtime friend Father Timothy Donahue remarked that he could “stand here all day” and tell stories about the priest he befriended on the first day of class at St. Mary’s Seminary and University in Roland Park 13 years ago.

“He had an absolutely wonderful sense of humor, and was a devoted son and brother who loved to celebrate Mass,” said Father Donahue, a 45-year-old priest serving at Church of the Most Holy Trinity in Augusta, Ga.

Ironically, he said that although Father Brooksbank performed live music and was involved in a public ministry, he was “terribly shy.”

“But that’s how he connected with people,” he said.

That connection was evident May 29, as nearly 1,000 people filled the stone church to honor the life of Father Brooksbank, 35, who died May 25 at St. Joseph Medical Center in Towson after battling a viral infection and kidney failure.

In his homily for Father Brooksbank, which drew tears from several in the faith community, Monsignor James M. Barker, pastor of St. Ignatius, Hickory, described his friend as having “a remarkable attitude of acceptance, of doing the best he could and being open to God’s will,” during the past seven weeks.

“He was so grateful for all the care and prayers and support that he was receiving,” he said. “Those who visited were in quiet awe of his attitude of courage and acceptance.

“(Father Kevin) realized and experienced the fact that this is not a perfect world,” Monsignor Barker said. “He wanted to give us hope in life, that if we remain faithful, we will be rewarded.”

He said that Father Brooksbank, who was ordained seven years ago by Cardinal William H. Keeler, loved to preach and “got so excited at making the Gospel of Jesus come alive for his parishioners.”

Father Tony Childs, associate pastor of St. Ambrose in Latham, N.Y., was a year ahead of Father Brooksbank in seminary, and recalled that his friend was “enigmatically complex and joyfully subtle.”

“He had just a very special, unique personality – you could see right inside him and know what he was all about,” the 40-year-old priest said. “He had a twinkle in his eye, a sharp wit, and he always wanted others to be as involved and having as much fun as he was.”

Father Donahue recalled that on St. Patrick’s Day in 1997, he was singing an Irish song, when Father Brooksbank ran excitedly to get his guitar so the two could play together

“At 2 in the morning, I finally said, ‘I have to go to bed,’ ” recalled Father Donahue, laughing heartily.

Later, the two decided to do public performances.

“We were going to play our first gig, and I said, ‘I feel like we’re the guinea pigs,’ ” said Father Donahue. “Another priest friend said, ‘With you two, it’s more like the Guinness pigs.”

From that day on, the Guinness Pigs performed music in nursing homes and Catholic schools in the archdiocese, eventually recording three CDs.

As he prepared to enter the church for the funeral, Father Donahue remarked that everyone was “in a state of shock.”

“To say goodbye so early is so sad,” he said, “and yet our faith helps us rejoice that Kevin is in heaven and we’ll see him again.”

“He is a priest forever,” said Archbishop O’Brien, “and hopefully his vocation will be replicated in this parish and others.”