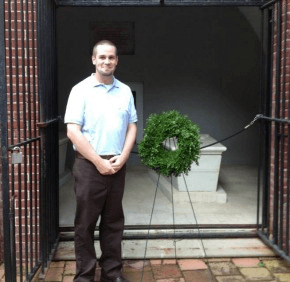 Sixth and final installment in a series, “How I Spent My Summer Vacation”

When that final bell on the last day of the school year is sounded, the mere thought of anything academic is gone for most students and teachers.

Michael Ellis, however, had a much different summer of 2016.

A history teacher at Notre Dame Preparatory in Towson, Ellis was one of just six teachers chosen to participate in the George Washington Life Guard Teacher Fellowship Program.

The fellowship, which began in 2013, provides selected educators the opportunity to work closely with the staff at the Fred W. Smith National Library for the Study of George Washington at Mount Vernon, the first president’s plantation, on the banks of the Potomac River in Virginia.

By gaining full access to Mount Vernon and its library, program fellows design new curriculum about the life, legacy and leadership of the man hailed as the father of our nation. At the end of the three-week fellowship, their research work is then distributed to a national audience.

“Everyone knows George Washington as the first president of the United States and that’s pretty much it,” Ellis said. “I wanted to humanize him and make my students see that he wasn’t a man born a statue, but a real person who made mistakes and was still able to mature into the humble and strong leader he was.”

Ellis was handpicked by a board of scholars and educators from hundreds of applicants from across the country to participate in the three-week fellowship.

The fellowship application process included submitting a project proposal, letters of recommendation and more. In the end, however, it was all worth it.

“When you’re a history nerd, you kind of stick out like a sore thumb most of your life,” said Ellis. “But at Mount Vernon, it felt like a Lego piece, it just clicked.”