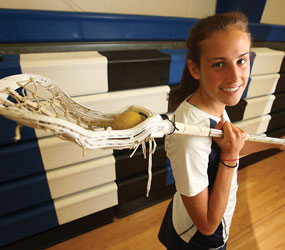 When Katie Laschinger was a senior lacrosse player at Notre Dame Preparatory School eight years ago, she could count on one thing every game.

Her youngest sister, Erin, would be off in a corner, lacrosse stick in hand, playing catch with their father, Dr. John Laschinger.

It’s a memory that lingers for all three, especially Erin as she enters the final weeks of her own career in a Blazer uniform.

“Just growing up with a stick in my hand, I got used to it really early,” Erin said following a two-goal performance in a 16-5 win over Severn April 30. “I owe a lot of my success to him.”

That success has come in bunches for Erin, who will graduate May 27 with a 4.0 grade point average.

She was recently named an archdiocesan Distinctive Scholar for having one of the top three grade point averages in her senior class. The honors keep coming, as Erin is also a Maryland Distinguished Scholar, a National Merit Commended Scholar and an Advanced Placement Scholar with honors.

Erin has been her class representative to the student council during the last four years and has served as president of NDP’s Habitat for Humanity chapter.

She is the last of four sisters to attend the Towson school. Katie was the first, followed by Meghan and Molly.

These are wistful days for Erin’s parents, John and Liz, as they stand on the hillside of Batza Family Field for games at Notre Dame.

“It’ll be sad,” Dr. Laschinger said. “NDP has always been fun to come to watch games. You know all the girls, and the girls are all good kids.”

Erin has provided a year of memories for the family and the school.

A first-team All-Metro selection a year ago in The Baltimore Sun, she’s garnered plenty of media attention this school year for her multi-sport success. In the fall, she was a standout for the tennis team, and last winter she was a dominant runner, sweeping the 800-, 1,600- and 3,200-meter titles at the Interscholastic Athletic Association of Maryland indoor track and field championships.

It’s on the lacrosse field where Erin has gained the most media attention. The reluctant star could be the Baltimore area’s best player, as she had tallied 55 goals and 22 assists before The Catholic Review went to press. She scored six goals May 1 in a 13-11 win over St. Stephen/St. Agnes of Virginia, a team ranked in the top five of most national polls.

Coach Mary Bartel said Erin’s impending graduation is the end of an era.

“The Laschingers are a wonderful family, so we had the pleasure of teaching all the girls,” Bartel said. “We were always happy with the ones we had and looked forward to getting another one.”

Erin will attend the University of Virginia in the fall and play lacrosse for the Cavaliers. It’ll be the first time she has attended a non-Catholic school.

“I’m definitely excited for college,” Erin said. “I think it will be different going to school and not talking about faith and morality.”

When she dons a Virginia uniform, it will immediately create a friendly family rivalry. Katie Laschinger played lacrosse for Duke University, a foe of Virginia’s in the Atlantic Coast Conference.

“I already told her who I’m rooting for when they play Duke,” Katie said with a smile.

The two have bonded on the field as Katie has served as an assistant coach.

“She gives me a lot of good, constructive criticism,” Erin said. “She can help give me tips. I really like having her around.”

Bartel would say the same thing about Erin, a player she describes as selfless.