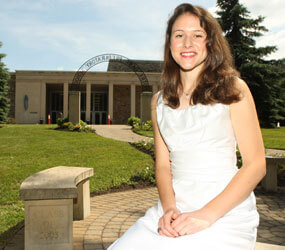 Emily Neil, a recent graduate of Notre Dame Preparatory School has a wide range of interests, including Spanish, writing, painting and the Baltimore Orioles.

What the 18-year-old is most passionate about, however, is not her favorite player Brian Roberts, but serving others.

“Catholic education places such an emphasis on growing our faith through service,” said Neil, who graduated from the Towson high school May 26. “Service is an expression of faith and an important part of our education.”

At NDP’s senior awards ceremony May 20, Neil was inducted into the National Art Honor Society and received many honors, including the Maryland State Scholastic Merit Award, Campus Ministry Award, Spanish Award, English Medal and the National Merit Commendation. She was also the recipient of two special service awards: the Mia Sutphin Award and the Bene Merenti Award.

“I was very humbled and honored to receive the Mia Sutphin Award, especially because I was able to meet the Sutphins, the parents of Mia. That was very special to me,” said Neil.

The Mia Sutphin Award is given to the student who demonstrates a passion for service and justice, both locally and abroad. In 2002, 27-year-old Sutphin, an NDP graduate, died of a reaction to medication she was taking to fight malaria while volunteering at an orphanage for HIV-infected children in Kenya.

According to Cami Colarossi, director of communications at NDP, the Bene Merenti Award is one of the school’s top four honors, recognizing a senior for activities both in school and in the community, which demonstrate to an exemplary degree the ideal of concern for the service to others, which is central to the Notre Dame philosophy.

One of Neil’s favorite activities at NDP is Camp Umoja, a summer camp program for children 5-12 who live in Baltimore City public housing. NDP and other high school students volunteer as camp counselors during two different two-week sessions during the summer.

“Getting to know the kids is the best part,” she said.

Neil has been a counselor since the summer after her freshman year. She was also involved in Club Umoja, an extension of the summer camp. Children from the summer program visit NDP once a month for activities such as holiday parties, crafts, games and their favorite activity: swimming. In addition to all of these service activities, Neil played softball at NDP all four years and maintained an academic standing in the top five percent of her class.

Neil attended kindergarten through eighth grade at St. Francis of Assisi School in Baltimore, where she is a parishioner and a lectern.

“We are still very much a part of the St. Francis community,” said Neil of her family, which includes younger brother Tim, a freshman at Loyola Blakefield, and older brother Matthew, a graduate of Archbishop Curley High School.

“By receiving a Catholic education,” she said, “I know I have grown in my Catholic faith. It has encouraged me to focus on spirituality and include it as part of my life. It’s not something separate that you only think about in church. It affects all of our actions and how we grow as a person and how we live our lives.

“I have so many wonderful memories of NDP. All of the people I’ve met – my teachers, my classmates, everyone who is a part of the school – I’ve learned so much from them. I’ve just been so inspired by them.”

In the fall, Neil will head to the all-female Barnard College in New York City.

“It’s a great school, and it has a strong history of writers,” she said. “It promotes the arts, and it promotes leadership of women.”

While she is unsure of her major, Neil definitely knows she wants to include service as part of her college experience, just as she made it a priority throughout high school.

“I have just loved NDP so much. I feel so grateful to have had the opportunity to go to school there,” said Neil. “I’m really sad to leave, but I’m excited to go off to college. I’ll always come back and visit.”