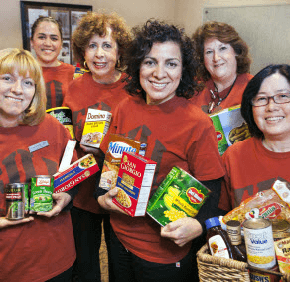 TIMONIUM – After reading about My Sister’s Place Women’s Center’s need for nonperishable food items, Dr. Lynn Chincheck decided her office’s fall service project would be a fall food drive for center, a Catholic Charities recource program that welcomes women who are homeless or poor and their children.

“When I saw My Sister’s Place it rang true to me,” said Chincheck, a parishioner of Church of the Nativity, Timonium. “This is an all-female office.”

Her Timonium dental practice began collecting food from staff members, patients, friends and neighbors Oct. 12. It accomplished its goal by filling an SUV with nonperishable food items, such as canned goods, pasta, rice and coffee, that were delivered to My Sister’s Place Nov. 16.

“To whom much has been given much is expected,” Chincheck said. “That is (my) guiding principle.”

The food drive comes at a pivotal time for My Sister’s Place, which serves three meals each day.

“We actually get the bulk of our nonperishable items around the holiday season that last us throughout the year,” said Laurianne Brown, the center’s operations coordinator, who has seen an increase in the number of meals served this year.

“We’ve used a lot of food over the past few months,” said Brown, who added 80 to 100 meals are served three times a day, nearly double the number served in recent years. “We have less (food) than we had at this time last year. We expect our numbers to increase throughout the winter. We never turn anyone away and we never run out of food, which is a great thing.”

The food drive isn’t the first service project for Chincheck’s office, which has supported local, national and international organizations since 2008.

“It really is part of our culture,” said Robin Boyle, Chincheck’s treatment coordinator and a parishioner of Church of the Immaculate Conception, Towson. “It’s a feel good for everybody.”

From 2008 to 2010, the office participated in an annual cancer fundraiser.

In August 2011, Chincheck and her oldest son, Connor, a 2012 graduate of Loyola Blakefield in Towson, spent 10 days in Romania providing dental services to those in need through a Texas-based international health care group.

Chincheck is planning another dental mission trip abroad in 2013.

This summer, the staff raised and donated $125 to the U.S. Olympic team.

“There will always be something else coming,” said Chincheck, who intends to organize at least one community service project annually. “(Service is) something I’ve always had in my heart. It’s a good example to set.”