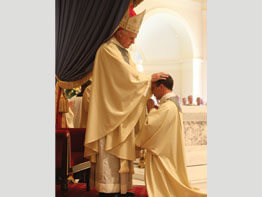 Parishes throughout the Archdiocese of Baltimore will join parishes across the country in promoting religious vocations during National Vocation Awareness Week Jan. 11-17.

The campaign kicks off on the feast of the Baptism of the Lord, which commemorates Jesus’ initiation into public ministry.

“We all have a call to spread the good news based on our baptism,” said Father Gerard Francik, archdiocesan vocations director. Vocation Awareness Week is a chance to encourage men and women to pray about how God wants them to live out their baptismal call, Father Francik said.

As part of the weeklong celebration, Father Francik will preach in Spanish at several area parishes. There will also be a vocation panel of priests, seminarians and sisters who will speak with young people at St. Timothy in Walkersville on Jan. 11 at 7 p.m.

Four seminarians from Mount St. Mary’s Seminary in Emmitsburg and a Daughter of Charity will answer questions about religious vocations in several Catholic schools throughout the archdiocese, and the parents of two seminarians will speak at the Masses at Holy Trinity in Glen Burnie.

The Cub Scouts at Immaculate Conception in Towson will race pinewood cars in a special vocation derby at 6 p.m. on Jan. 16.

Monsignor James Barker, pastor of St. Ignatius in Hickory, said his parish is promoting Vocation Awareness Week by publishing a brochure in the bulletin that encourages families and young people to talk about priestly vocations. The parish will also publish all the ordination anniversaries of the parish priests and deacons and ask parishioners to pray for them and for future vocations.

“Each weekend, we pray for vocations in the Prayer of the Faithful at every Mass and at adoration of the Blessed Sacrament on Sundays,” he said. “The prayers are being heard. Our parish has three young men attending the archbishop’s discernment retreat later this month.”

Benedictine Father Paschal Morlino, pastor of St. Benedict in Baltimore, said a deacon will preach on vocations at all Masses and visit the Sunday school classrooms during Vocation Awareness Week. Special posters will also be displayed, he said. Like many other parishes, St. Benedict hosts exposition of the Blessed Sacrament each Wednesday from 8 a.m.- 6:30 p.m. for vocations.

Leaders at Our Lady of Perpetual Help in Ilchester plan to hang vocation posters and distribute prayer cards, according to Father Lawrence P. Adamczyk, associate pastor. The rosary prayed on the first Friday of the month and Eucharistic adoration will be for the intention of vocations.

Father Francik highlighted the recent opening of the newly named Cardinal Keeler House of Discernment on the second floor of St. Matthew’s rectory in Northwood as a positive development in promoting vocations. Four men preparing for the priesthood have already moved in and two more will be arriving soon, he said. They include foreign-born seminarians who are studying English. The house will also host monthly gatherings for those considering the priesthood, he said.

For more information about religious life, call 410-547-5426 or visit www.becomeapriest.org.