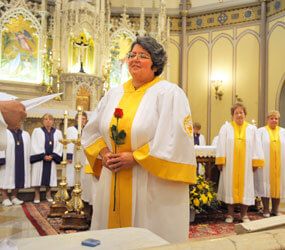 WASHINGTON – Libby Ramirez, who just completed two years as the national regent of the Catholic Daughters of the Americas, and her successor, Joanne Tomassi, said that beyond all the worthwhile programs members carry out, spirituality is the most important part of the organization.

“We cannot achieve what we achieve as an organization without having God’s power within us to do it,” said Tomassi, who is from St. Pete Beach, Fla.

She was inducted into office to succeed Ramirez as the new national regent during the 53rd biennial national convention of the Catholic Daughters, held in Buffalo, N.Y., July 14-18. It is one of the oldest and largest organizations of Catholic women in the Americas.

Both women spoke to Catholic News Service in telephone interviews July 20 about their years in the organization, why they belong and their respective goals for national office.

“This has been a very successful two years,” said Ramirez, who is from Victoria, Texas. “I was very blessed to have a tremendous board to work with. We all (the national board) have worked hard together as a team.”

Tomassi and Ramirez are not strangers to each other. Tomassi worked alongside Ramirez for the past two years as national regent-elect to help run the Catholic Daughters and to prepare herself for holding the office for the next two years.

Following the convention, there is a 30-day transition period during which Ramirez will help Tomassi assume her responsibilities.

Ramirez told CNS she became involved with the Catholic Daughters at the local level in 1983 when she was invited to join by a friend who asked her at a Knights of Columbus function where Ramirez was helping her husband.

Formed in 1903, the Catholic Daughters has more than 90,000 members who belong to more than 1,400 chapters, known as courts, in 45 states and in Puerto Rico, Mexico, the Dominican Republic, Guam and the U.S. Virgin Islands.

Membership is open to women of all ages. Those ages 8 to18 can join the Junior Catholic Daughters of the Americas. College-age women can belong to campus courts at universities across the country.

Ramirez held various offices at the local, state and national level before her 2008-10 term as national regent, which she described as “a full-time 24/7-hour job.”

“I came into office with two major goals,” she said. “To finish the process of revising our procedure handbook, ‘The Tools of the Trade – Second Edition,’ and to reorganize our system of campus courts along with promoting membership.”

Overall, Ramirez felt she accomplished what she set out to: The handbook was published and the organization’s number of campus courts grew from a few to 14.

Tomassi is coming into office with the theme: “With God all things are possible.”

She began volunteering with the Catholic Daughters as a 10-year-old, helping her mother, who was an active member. When she turned 18, Tomassi became a member and for the past 37 years has been intricately involved in leadership and volunteer aspects of the organization.

Tomassi told CNS she has three specific goals for her term: to increase membership and educate current members about the organization; to continue developing campus courts and create new membership rules for them; and to add more territorial courts, which are single local courts that are not part of a state court.

Catholic Daughters participates in the church’s various religious, charitable and educational ministries. Members promote justice, equality, and the advancement of human rights and dignity on the local, state, and national levels.

“I have always been taught to give back,” Tomassi said. “Through local members investing their time, talent and treasure, each individual’s small contribution multiplies and our organization is able to contribute on a very large level.”

Among other activities, the organization has youth, spirituality and leaderships program.

On the national level, it is involved in Habitat for Humanity, with members donating money but also helping to build Habitat houses for low-income people. It maintains a fund to helps people in need after disasters, such as the recent mine accident in West Virginia.

It’s a supporter of Holy Cross Family Rosary, begun by the late Holy Cross Father Patrick Peyton, and Support Our Aging Religious, known as SOAR, which raises funds to provide grants to religious communities to help them minister to their elderly members.

The 21st century finds even multitasking women in a tight spot to find volunteer time in their hectic schedules, but both Ramirez and Tomassi agreed their members are committed individuals who find time to dedicate to their important ministries.

“Even if our members are not physically present at the weekly meetings, they support us through their prayers and financial support and find time to volunteer at our large events when their numbers are really needed,” Tomassi said.

During the Buffalo convention, the leadership announced the organization’s charitable donations totaled $206,000, which was split between various Catholic organizations, services and schools.

Of the total, $50,000 of the sum went to another of the Catholic Daughters national projects – the Smile Train, an international charity that provides free surgery to children who were born with a from cleft lip and palate. The donation will allow 2,000 needy international children to receive cleft-palate surgery.

“Although there is always room for improvement,” Ramirez said, “I feel our members volunteer their time immensely, and give a tremendous amount of time to their churches and communities.”