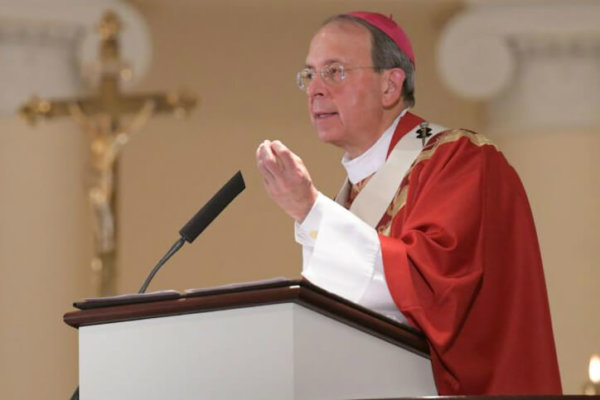 Baltimore Archbishop William E. Lori delivers the homily during the opening Mass of the Fortnight for Freedom June 21 at the Basilica of the National Shrine of the Assumption of the Blessed Virgin Mary in Baltimore. Archbishop Lori is chairman of the bishops' religious liberty committee. (Kevin J. Parks/CR Staff)

INDIANAPOLIS — Since its creation, the U.S. bishops’ religious liberty committee has garnered much attention on the national stage for its efforts to protect religious freedom and fight government infringement on that freedom.

Most notable has been its opposition to the Health and Human Services mandate — as part of the Affordable Care Act — requiring most religious employers, like other employers, to provide coverage of abortifacients, sterilization and contraceptives for employees even if they are morally opposed to such coverage.

At the state and local levels, religious liberty advocacy also has made strides.

At the bishops’ spring assembly June 14-15 in Indianapolis, Baltimore Archbishop William E. Lori, the committee’s chairman since its inception, noted that it has worked closely with state Catholic conferences across the country in promoting religious freedom. (At the meeting the bishops also voted to made the ad hoc committee permanent.)

“As we meet with the state Catholic conference directors, we learn from them what’s going on in municipalities, in state capitols,” he said. “We get a fuller sense from them as to what some of the challenges are in addition to the federal challenges.”

The Texas Catholic Conference of Bishops recently worked with that state’s Legislature to put in place conscience protection for religious agencies that facilitate adoptions and place children in foster care.

On June 15, the same day that the bishops made the religious freedom committee permanent, Texas Gov. Greg Abbott signed into law the Freedom to Serve Children Act, which prohibits the state government from discriminating against religious-based agencies that facilitate adoptions and foster care.

The bill, written by Republican Rep. James Frank, allows organizations and individuals “with sincerely held religious beliefs to remove themselves from actions in direct violation of their faith,” such as assisting a minor in obtaining an abortion and providing foster care services to same-sex couples.

Similar laws, which have been passed in Michigan and South Dakota, are in part a response to court decisions in Illinois and Massachusetts that required such agencies to place children in the homes of same-sex couples, even against the beliefs of their sponsoring faith community. As a result, Catholic Charities agencies in those states stopped facilitating adoptions and foster care.

Jennifer Allmon, executive director of the Texas Catholic Conference of Bishops, said the organization’s advocacy for the bill was focused more on ensuring the Catholic Church’s continued care for children in need at a time of crisis in the Texas foster care system.

“Texas needs us in this marketplace,” she said. “And we were happy to serve in this marketplace, but we want to bring our faith with us. This really shifted the dynamic. It went from a bill that maybe had a hearing and that’s all, to a pretty major effort.”

The bill garnered votes from legislators she expected to oppose it and afterward, Allmon said, she spoke to one of those legislators about why he voted for it.

“He said, ‘Look, my district is very poor,'” Allmon recalled. “‘And the only one who ever comes to my district to serve people and ask what they can do to provide help to our poor people is Catholic Charities. I’m not about to vote against them on a bill, whatever the issue is, because no one else is willing to serve my kids. You are. If you need to serve them in this way, fine.'”

In Michigan, the bishops’ state Catholic conference sponsored its “Freedom to Serve” project, a series of TV commercials promoting religious liberty on stations across the state.

The advertisements focused on the significant contribution that Catholic Charities agencies make to the common good in Michigan. It highlighted the fact that a church agency is one of the largest providers of bottled water in Flint, Michigan, where for several years residents have been exposed to dangerous levels of lead in the water supply.

Paul Long, president and chief executive officer of the Michigan Catholic Conference, said that focusing on “freedom to serve” in the campaign is part of an effort “to rebrand the religious liberty discussion, because the phrase ‘religious liberty’ has become almost a pejorative phrase.”

“It’s code for bigotry, partisanship and ideology,” he told The Criterion, newspaper of the Archdiocese of Indianapolis. “We want to move away from that and talk about the service that we do in the community to appeal to a broad sense of the population.”

Long said that he hopes the conference will re-start the advertising campaign in the fall.

“The issue of religious liberty and the freedom to serve is so critically important, not only today, but going forward,” he said. “The commercials are to tug at people’s hearts and minds to help them understand and believe as we do about the importance of the issue.”

Fortnight for Freedom: Archbishop Lori urges faithful to work for ‘holiness of freedom and freedom for holiness’