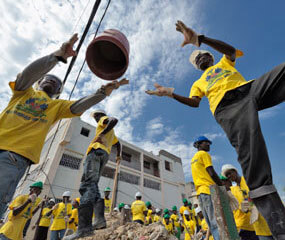 In my nearly four-decade career working in humanitarian aid at Catholic Relief Services, I have seen and participated in major emergencies around the world. What happened when the earthquake struck Haiti a year ago was like no other disaster I have experienced. The immensity of destruction, the endemic poverty and the absence of a strong government are some of the factors that have made the work of organizations like CRS so challenging.

That said, we have a real opportunity here – in large part because of the outpouring of generosity from around the world and particularly from American Catholics – to re-think how we help Haiti.

If we do not do that, all we may be able to say is that many good acts of charity were done and some buildings were reconstructed, yet Haiti remains a broken society, with even more Haitians lived in soul-grinding poverty.

Over the last three decades when faced with problems in Haiti, our solutions have too often been to do it, fix it and run it. Active in Haiti are thousands of fragmented, individual initiatives and hundreds of humanitarian groups, religious organizations, individual parishes and even individuals.

While these efforts have improved the lives of many, they have too often also promoted a mentality of passivity and reliance on foreign solutions and resources while undermining the responsibility of the nation as a whole – both its government and its other civil institutions. That’s what we have to change. It’s a tall order.

Think of the emergency responses that played best in the media after the earthquake – medical teams treating broken bones, rescue squads pulling people out of collapsed buildings. This was great work that saved lives, but their appeal is that they fit into our conception of the delivery of aid following a disaster: people from the developed world swooping in to rescue the poor, uneducated, helpless victims. That’s the narrative we have to get away from if we want Haiti to progress.

At CRS we feel a particular responsibility for Haiti, because it is a Catholic country. One reason America was so generous with its outpouring of aid is that Haiti is so close, just off our shores. Our histories are intertwined.

From a Catholic perspective, this proximity has resulted in many parishes in the United States adopting parishes in Haiti, sending money and other contributions. Such generosity is admirable. But rarely do these adopted parishes grow up and walk on their own. It is a relationship, formed with the best of intentions, that breeds dependence.

This is the tightrope we walk, as we move forward in Haiti – encouraging the generosity that so many have shown while steering the money in new directions so its use will be coordinated and have longer lasting benefits.

How do you do that?

Around the world, CRS tries to act in support of local partners. On the ground, they are usually better than we are. They know the community and its needs, and when the program comes to an end, we’ve left behind people with useful experience that benefits the community.

Too often in Haiti, we do the work ourselves because our local partners are not strong enough. We haven’t done enough to make them strong. Far too many aid groups and charities have done business this way in Haiti. Handout after handout does not generate empowerment, it does not increase ability and capacity. It breeds dependence.

That’s what we have the opportunity to stop in Haiti.

In all our programs – medical, housing, water and sanitation, whatever – we are working with communities and getting them involved, not just telling them what to do. This is the way Haitians will work and build a new country. It might be faster and more appealing to an American audience if we did the work ourselves, but we can’t continue to do that if we are going to get this right.

We are proud that CRS has been in Haiti for 55 years. We were with Haitians through the earthquake and we are going to be with them in this recovery for years to come. Though we have gotten some criticism because we have not spent all the money we raised, we will have no problem spending it all, and more. There’s a lot of work to do.

My dream, if we do get this right, is that in the future we will play a smaller role, supporting Haitians who are doing the work, through their church and government.

And maybe 55 years from now, we won’t be there at all, because Haitians won’t need us.

Ken Hackett is the president of Baltimore-based Catholic Relief Services, the official international humanitarian agency of the Catholic community in the United States.