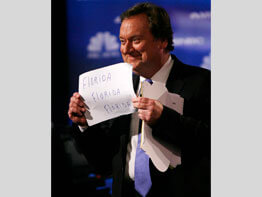 WASHINGTON – NBC News Washington bureau chief and “Meet the Press” moderator Tim Russert, who died June 13 at the age of 58, was remembered for his warm lifelong ties to the Catholic Church and his support for Catholic education as well as for his career covering politics.

Mr. Russert collapsed of an apparent heart attack at work.

An active Catholic who apparently kept a promise to God to never miss Sunday Mass if his son was born healthy, Mr. Russert spoke often and fondly of his Catholic school education and of the role of the church in his life.

“Americans valued his tremendous command of the political electoral process and his commitment to discovering each aspect of the story that contributed to people having a better awareness of the issues of public life and candidates for political office,” said Archbishop George H. Niederauer of San Francisco, chairman of the U.S. bishops’ communications committee, who was attending the U.S. bishops’ spring meeting in Orlando, Fla.

“But those of us who shared his Catholic faith and his deep love for it appreciate his sharing of the story of his own faith and his loyalty to the life of the Catholic Church in this country and the many charities to which he contributed his time and talent,” the archbishop told Catholic News Service.

Mr. Russert had been scheduled to give the Catholic Common Ground Initiative’s Philip J. Murnion Lecture June 27 at The Catholic University of America in Washington.

In opening the 2000 convention of the National Catholic Educational Association, Mr. Russert recalled his years at Canisius High School in Buffalo, N.Y., and John Carroll University in Cleveland, both Jesuit schools. Mr. Russert said his father, a sanitation worker who never finished high school, “worked two jobs all his life so his four kids could go to Catholic school, and those schools changed my life.”

“Sister Mary Lucille founded a school newspaper and appointed me editor and changed my life,” he added. Teachers in Catholic schools “taught me to read and write, but also how to tell right from wrong.”

Monsignor Francis Maniscalco, former communications secretary for the U.S. Conference of Catholic Bishops, described Mr. Russert as a formidable journalist but also “just a very good man” and “very much a down-to-earth Catholic.”

“He took his religious faith seriously,” said Monsignor Maniscalco, who is currently the Respect Life director and public policy adviser for the Diocese of Rockville Centre, N.Y.

The priest said Mr. Russert was a “serious Catholic” as shown in his book, “Big Russ & Me.” He also recalled how Mr. Russert helped the bishops’ communications department put together a group of Washington-based journalists at the time of the clergy sex-abuse crisis to discuss media coverage of the issue.

He fondly remembered how Mr. Russert was “always double-checking to see if he could get an interview with Pope John Paul (II),” and periodically reminding Monsignor Maniscalco the interview had been loosely promised by the Vatican.

Mr. Russert told church workers attending the 2005 Catholic Social Ministry Gathering that “if there’s an issue that Democrats, Republicans, conservatives and liberals can agree on, it’s our kids.” With “15 million kids largely living off the streets” and 12 youths shot dead daily in the United States, addressing the issue is imperative, Mr. Russert said.

“Who are our children? How do we get into their hearts and minds,” Mr. Russert asked, “to get them to see the value of our values?”

In dealing with his own son, Luke, Mr. Russert added that he tells him, “You are always, always loved, but you are never entitled.”

Mr. Russert, his wife, Maureen Orth, and their son had just returned from a trip to Italy to celebrate Luke’s graduation from Boston College.

Senate Majority Leader Harry Reid of Nevada said in a statement that Mr. Russert “was a warm and gracious family man with a great zest for life and an unsurpassed passion for his work” whose work was an inspiration to many.

“Tim asked the tough questions the right way and was the best in the business at keeping his interview subjects honest,” Reid said.

President George W. Bush said in a statement that Mr. Russert “was an institution in both news and politics for more than two decades. Tim was a tough and hardworking newsman. He was always well-informed and thorough in his interviews. And he was as gregarious off the set as he was prepared on it.”