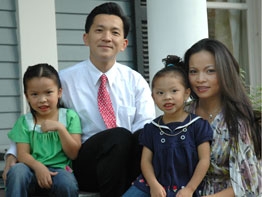 NEW ORLEANS – If his recent whirlwind tour of Capitol Hill was any indication, Anh “Joseph” Cao knows he will be in for the ride of his life over the next two years.

Little known in early December except to those in his close-knit Vietnamese community in New Orleans, the Republican attorney who once studied to become a Jesuit priest rocked the national political landscape Dec. 6.

Mr. Cao’s victory certainly was aided by the legal cloud over Jefferson, who faces 16 public corruption charges after the FBI found $90,000 in marked bills in his freezer and connected him and several of his relatives to a bribery scheme. That case will go to trial early in 2009.

Mr. Cao, 41, also was helped by extremely low voter turnout in the general election, which was delayed by more than a month. The election was late because Hurricane Gustav hit the area in September and forced postponement of the primary elections.

Mr. Jefferson had won the delayed Democratic primary Nov. 4, the date of the presidential election, when nearly 163,488 people cast votes. With only one race on the ballot for the Dec. 6 general election, only 66,846 voted, and Mr. Cao won by a margin of 49.6 to 46.8 percent.

Mr. Cao was not surprised by the results. He spent a week in early December touring Capitol Hill and getting the red-carpet treatment from Republicans buoyed by his unlikely victory.

“A lot of people were surprised at our win, but I was not because I had a very strong group of supporters,” said Mr. Cao, a parishioner of Mary Queen of Vietnam Church in a section of the city’s Ninth Ward known as New Orleans East.

After Hurricane Katrina Mr. Cao helped in a legal battle to close a New Orleans East landfill where hurricane debris was being dumped.

Mr. Cao was 8 years old in 1975 when he immigrated with his brother and sister to the U.S. three days before the fall of Saigon. His father, a South Vietnamese military officer, was sent to a communist “reeducation” camp for six years.

After living in Indiana for four years, Mr. Cao moved to Houston for high school and earned a bachelor’s degree in physics from Baylor University in 1990. He then entered the Society of Jesus at Grand Coteau, La., beginning what would be six years of religious training.

“I grew up in a very religious, Catholic environment,” Mr. Cao said in an interview with the Clarion Herald, newspaper of the New Orleans Archdiocese.

“All of my family have been very devout Catholics. When I visited my grandmother in Chicago, I would ask her to take me to daily Mass,” he said. “She would ask me to recite the rosary with her. A lot of my religious training came from my grandmother.”

As a Jesuit scholastic, Mr. Cao earned a graduate degree in philosophy from Fordham University in New York and did anti-poverty work in Mexico and overseas. He also taught philosophy at Loyola University New Orleans. Both universities are run by the Jesuits.

Mr. Cao said his discernment, especially with spiritual direction from Jesuit Father Tom Stahel, eventually led him to feel he would better serve the poor by becoming an attorney and possibly entering politics.

“When I was in Mexico helping the poor, I had a struggle with the issue of poverty and of evil in the world,” Mr. Cao said. “I told my spiritual director about my struggles, and basically he told me that God sends good people to help with human suffering – people like Gandhi and (the Rev.) Martin Luther King (Jr.). I thought the best way I could effect social change was to go to law school and into politics.”

After leaving the Jesuits in 1996, Mr. Cao met his future wife, Hieu “Kate” Hoang, in 1998 at a Marian festival at Mary Queen of Vietnam. They married and have two daughters, Sophia and Betsy. His wife, a pharmacy graduate of Xavier University of Louisiana, is quitting her job at a Walgreen’s pharmacy to move to the Washington area.