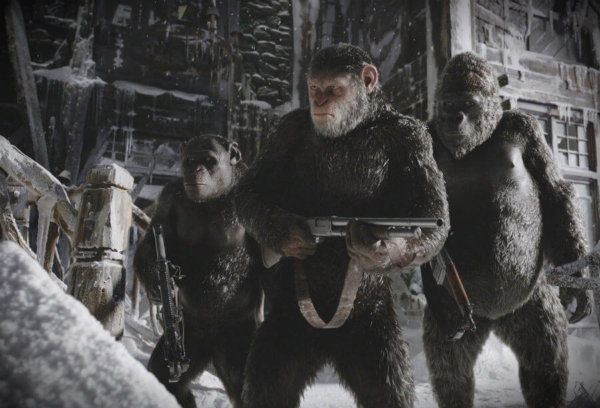 This is a scene from the movie "War for the Planet of the Apes." The Catholic News Service classification is A-III -- adults. The Motion Picture Association of America rating is PG-13 -- parents strongly cautioned. Some material may be inappropriate for children under 13.

NEW YORK — Monkey business turns deadly serious in “War for the Planet of the Apes” (Fox), the climactic installment of the rebooted film franchise based on the work of French science-fiction author Pierre Boulle (1912-1994).

This grim, violent 3-D movie picks up two years after the events of 2014’s “Dawn of the Planet of the Apes,” which presaged a great conflict between the super-sentient simians (rendered remarkably lifelike in CGI) and what’s left of the human race after a devastating epidemic.

Caesar (Andy Serkis), the erudite ape leader, is battle-scarred and weary. He wants nothing more than to lead his people, Moses-like, to a promised land in the desert, far away from the enemy.

“We are not savages,” he insists.

Unfortunately, the ragtag human army has other plans. Its leader, the Colonel (Woody Harrelson), is hell-bent on annihilation. With his bald head, crazy eyes, and messianic complex, he’s a dead ringer for another colonel, Kurtz, in “Apocalypse Now.”

When tragedy strikes the apes’ compound, Caesar is transformed — and not for the better. A personal loss fills him with rage and a desire to seek revenge on the Colonel.

Abandoning his flock, Caesar sets out for the heart of darkness, accompanied by Maurice (Karin Konoval), his trusted orangutan adviser, and Rocket (Terry Notary), his right hand.

Along the way they pick up a mute human girl (Amiah Miller), whom they christen “Nova” (after, of all things, the former Chevrolet automobile), as well as a manic simian called Bad Ape (Steve Zahn), who provides welcome comic relief.

Director Matt Reeves, who co-wrote the screenplay with Matt Bomback, earnestly strives for epic status with grandly staged battle scenes, but is a bit heavy-handed when it comes to religious imagery. In fact, a better title for this film would be “The Passion of the Apes,” especially as Caesar is scourged and hung on a St. Andrew cross while his fellow apes are tortured or killed.

However, the spiritual messages are decidedly mixed, even troubling. While the apes espouse winning Christian values of peace, love, and family, there’s a subtle anti-Christian message in the evil Colonel, who wears a cross around his neck, displays one in his quarters, and gleefully announces that he is waging a “holy war.”

The film contains frequent stylized violence, two uses of profanity, and a subtle anti-Christian message. The Catholic News Service classification is A-III — adults. The Motion Picture Association of America rating is PG-13— parents strongly cautioned. Some material may be inappropriate for children under 13.