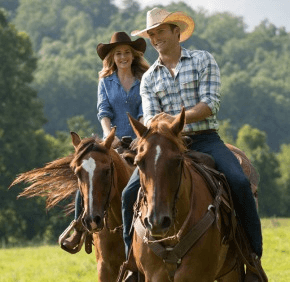 NEW YORK – Though it’s likely to prove a crowd pleaser, the romantic drama “The Longest Ride” (Fox) amounts to little more than a sentimental soap opera.

Amid lush rural scenery and a glorification of contemporary cowboy culture such as might be featured in a pickup truck commercial, Wake Forest University senior Sophia (Britt Robertson) falls for professional bull rider Luke (Scott Eastwood). Shy Sophia has only to witness Luke’s cattle-subduing stamina during what is literally her first time at the rodeo for love to start bucking her world.

The ride home from Sophia and Luke’s initial get-together takes an unusual turn when they stop to rescue 90-year-old Ira (Alan Alda) from the roadside wreckage of his car, thereby saving his life. At Ira’s feebly voiced behest, Sophia also retrieves a wicker box that turns out to contain a series of letters young Ira (Jack Huston) wrote to the girl of his dreams, Ruth (Oona Chaplin).

What better way to pass Ira’s stint in the hospital than for Sophia to read these epistles aloud to him? Screenwriter Craig Bolotin can certainly think of none, so we get Ira’s back story.

Ruth was a vibrant Jewish refugee from Nazi-occupied Vienna whose exile in Greensboro, North Carolina, was softened by her budding relationship with Ira. But Ira’s battlefield heroism during World War II shortly after the two became engaged led to a problem that threatened their impending marriage.

When she’s not providing Ira with the opportunity to narrate his saga, Sophia agonizes over the barriers that seem to obstruct her own path to happiness. These include the fact that she’s soon to depart the Tar Heel State for far-off New York City where she’s landed a prestigious internship at an art gallery – but whither her beau, alas, will not be following.

Worse yet, homespun Luke, it seems, don’t cotton to Kandinsky and such.

The device of using Ira’s letters to Ruth to tell their story has a fatal flaw: Unlike the audience, after all, Ruth would presumably not have needed Ira’s elaborate written explanations to understand events she herself had just experienced. On the other hand, touches of humor do keep things moving along.

Circumstances between Ira and Ruth take a turn that can be read either as undercutting or supporting nuptial faithfulness. Though the outcome is a morally positive one, steps along the way to it suggest that wedding vows can legitimately be set aside if they seriously impede a spouse’s self-fulfillment.

The film contains brief combat violence with mild gore, a few scenes of semi-graphic premarital sexual activity, partial nudity, a couple of instances of profanity and a smattering of crude language. The Catholic News Service classification is A-III – adults. The Motion Picture Association of America rating is PG-13 – parents strongly cautioned. Some material may be inappropriate for children under 13.