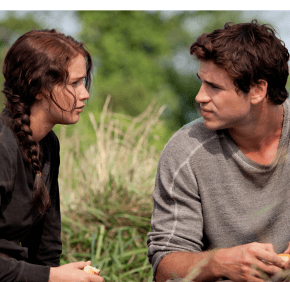 By John Mulderig
Catholic News Service
NEW YORK (CNS) — Though presumably targeted — at least in part — at teens, the dystopian adventure “The Hunger Games” (Lionsgate) involves enough problematic content to give parents pause. Responsible oldsters will want to weigh the matter carefully before giving permission for clamoring kids to attend.
At first glance, the depressing futuristic premise of the piece — inherited from Suzanne Collins’ best-selling trilogy of novels, on the first volume of which the film is based — makes it seem unlikely fare for a youthful audience.
In a post-apocalyptic North America, have-not youngsters from oppressed outlying districts are chosen at random to participate in the titular event, a televised survival tournament staged each year for the entertainment of the decadent elite who populate their society’s luxurious capital city.
Since combatants are forced to battle one another — and the hostile wilderness environment in which the games are set — until only one remains alive, the fearful ordeal also serves to keep the once-rebellious, now cowed underlings intimidated.
Director and co-writer Gary Ross’ script, penned in collaboration with Collins and Billy Ray, tracks two teens caught up in this gladiatorial horror show. As early scenes reveal, Peeta Mellark (Josh Hutcherson) was selected in the usual way. Heroine Katniss Everdeen (Jennifer Lawrence), by contrast, altruistically volunteered herself as a substitute after her vulnerable younger sister Primrose’s (Willow Shields) name was drawn.
What follows, as this sympathetic duo confronts their doom, is an effective combination of epic spectacle and emotional drama during which humane values are pitted against Darwinian moral chaos.
Insatiable media coverage, led by smarmy TV host Caesar Flickerman (Stanley Tucci), and the wildly off-kilter values of the foppish upper crust, embodied by Peeta and Katniss’ nannylike escort Effie Trinket (Elizabeth Banks), satirically mirror some darker aspects of our own time. (Interestingly, depending on the individual viewer’s politics, the basic allegory can be read either as a critique of overweening big government or of the trampling under of the 99 percent.)
But sensibilities are not spared as the grim contest unfolds: painful injuries brought about by swords, arrows, hatchets and even the creative use of a hornets’ nest are all portrayed unblinkingly. On the upside, foul language is entirely absent, as too is any sensual activity beyond kissing. So, despite the elements listed below, “The Hunger Games” may possibly prove acceptable for mature adolescents.
The film contains considerable, sometimes gory, hand-to-hand and weapons violence and graphic images of bloody wounds. The Catholic News Service classification is A-III — adults. The Motion Picture Association of America rating is PG-13 — parents strongly cautioned.  Some material may be inappropriate for children under 13.
– – –
PrevNext