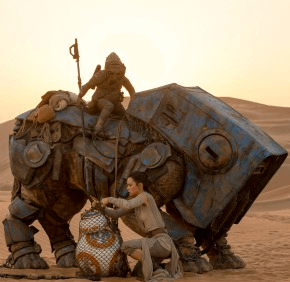 By Christopher Gunty
editor@catholicreview.org
Twitter: @ReviewGunty
A young scavenger left on the desolate planet Jakku and a reluctant Storm Trooper find their fates intertwined as they learn about the light and dark sides of the Force in “Star Wars: The Force Awakens,”the seventh episode in the popular movie series, and the first of a new trilogy.
It’s 30 years after the events in 1983’s “Star Wars: The Return of the Jedi” (Episode VI). The defeated Empire (the bad guys) has given way to the new First Order, a distinction without much difference. The Republic (the good guys) tries ably to govern the galaxy, assisted by the Resistance (also the good guys).
The Resistance has the weapons and ships the Rebels had. The First Order has the Empire’s ships and resources, backed by wave upon wave of disposable Storm Troopers, usually young men taken from their families as children, with conscription the only life they have known.
When trooper FN2187 (John Boyega) reveals a conscience, and cannot bring himself to kill innocent people, he finds a way to help save resistance pilot Poe Dameron (Oscar Isaac), and is unwillingly thrust into the conflict. Unsatisfied with calling FN2187 by the only name he has ever known, Poe decides to call him Finn.
Meanwhile, our scrappy scavenger, the clever and resourceful Rey (Daisy Ridley) picks up Poe’s BB-8 rolling robot. The BB unit contains a piece of a crucial map that will assist the Republic, and foil the First Order’s plans to find and recruit for the dark side the legendary Luke Skywalker, who disappeared after the battle with the Empire and the death of his father, Darth Vader.
Our new heroes are chased across the galaxy by new villains, chief among them Kylo Ren (Adam Driver), who wears a mask reminiscent of that of Vader, whose death he vows to avenge. Ren is strong in the force – unfortunately, it’s the dark side.
Our favorites from the previous trilogy are back, as well: General Leia Organa (Carrie Fisher), Han Solo (Harrison Ford), Chewbacca (Peter Mayhew) and that “piece of garbage” ship that never lets its heroes down, the Millennium Falcon.
Director J.J. Abrams has made a sequel that respects its past and pays homage to it, while creating its own future. This new generation of protagonists – Poe, Rey and Finn – echoes the relationships between Luke, Leia and Han. Abrams cast his leads similar to George Lucas’ choices in the first Star Wars movie from 1977, selecting young, relative unknowns for the key roles.
“The Force Awakens” returns to the gritty, elemental feel of the film we now know as “Episode IV: A New Hope.” It does not have the polished feel of the series’ Episodes I-III. While utilizing today’s available computer graphics, the director utilizes deserts and lush landscapes to show the contrast between planets. Rey, abandoned by her parents on sand-covered Jakku, notes on landing on a vegetation-covered planet, “I never knew there was so much green in the galaxy.” Green, notably, is the color of hope in literature.
The cinematography is wonderful, both of landscapes and the interiors of massive starships. When Rey ventures down a ragged wall in a starship, the audience gets a touch of vertigo.
But the characters matter, too. It seems that Poe and Finn and then Finn and Rey become fast friends, almost too fast. But that can be explained by the affinity that can develop quickly with people involved in intense situations.
Amidst the grit, grime and violence (from blasters, ship weapons and a new replacement for the Death Star) the sardonic humor, with a side of bravado, shines through. Finn’s all-too-eager admission to Rey that he’s part of the resistance is smacked down by Han Solo, who tells him, with the wisdom of experience, that “women always find out the truth.”
Kylo Ren’s anger issues are part of his inner struggle to embrace the dark side of the Force, while being pulled back by the light side. He reveals his vulnerable side while trying so hard to be perfectly evil.
Star Wars – in all its episodes so far – has always been about the struggle between good and evil. Rey and Finn learn in wide-eyed wonder from Solo that the “myths” they had heard about the Force and the legendary battles “are all true.”
So it is. Some who believe in the universe’s unifying Force have aptitude for it; some are drawn to the light side and some to the dark. And each has its helpers or minions. The First Order, whose Supreme Leader embraces the dark, brings to mind the Third Reich. The Republic needs Skywalker to provide balance.
While the Force is not a Catholic idea, the struggle between good and evil, lightness and darkness, is a struggle with which we all live. Our choice to follow one path or the other comes from our free will, and appropriate consequences follow.
The lead performances do not disappoint. Ridley is especially competent as Rey, bringing poise and depth to the role. Byoega does the same with Finn.
It’s also good to see the old-timers back. Fisher and Ford provide a touching moment when they reunite after years – and light years – apart. In this decidedly technological movie, they provide a human element that was missing between Anakin Skywalker (later Darth Vader) and Padme in Episodes I-III.
While it helps to have seen the earlier movies, the opening crawl and early exposition reveal enough of the backstory that even if you’re new to the franchise, “The Force Awakens” makes sense on its own.
The film contains a great deal of violence, including hand-to-hand combat and wholesale slaughter, so it’s not appropriate for little ones (the MPAA rating is PG-13; the Catholic News Service classification is A-II – adults and adolescents.)
As the torch – or lightsaber – is passed to the next generation of galactic fighters, it seems the Star Wars movie universe is in good hands.
For more movie reviews, click here.
PrevNext