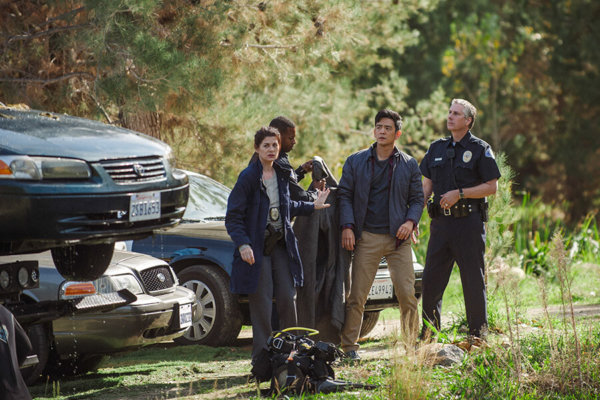 Debra Messing and John Cho, center right, star in a scene from the movie "Searching." The Catholic News Service classification is A-III -- adults. The Motion Picture Association of America rating is PG-13 -- parents strongly cautioned. Some material may be inappropriate for children under 13. (CNS photo/Sony)

NEW YORK (CNS) — Those on the lookout for an above-average thriller boasting both surprising plot developments and upright basic values will probably be pleased with “Searching” (Screen Gems). While it’s handled discreetly, however, at least one of the many twists and turns taken by director and co-writer Aneesh Chaganty’s gripping feature debut — penned with Sev Ohanian — places his film off-limits for most youngsters.

John Cho plays doting widowed dad David Kim. After his only child, 16-year-old Margot (Michelle La), suddenly disappears, and Detective Vick (Debra Messing), the officer on the case, finds she has little to go on, David turns to the internet for answers, investigating Margot’s online social interaction for clues about her fate.

As a result, he quickly discovers that he knows less about Margot’s life than he thought he did. Some of the evidence, for instance, suggests that the seemingly content high schooler may have run away. Additionally, a number of her apparent friends turn out to be no more than acquaintances.

David also learns that his reticence about his deceased wife, Pamela (Sara Sohn), has hindered, rather than helped, Margot’s recovery from her loss.

Grown viewers will likely appreciate the clever way Chaganty and Ohanian incorporate current, ubiquitous technology into the plot as well as their script’s subtle but touching affirmation of family life in the face of death and grief. Audience empathy with David’s agonizing situation, moreover, is heightened by the understated manner in which Cho portrays him.

Plausible, yet wholly unforeseen, the wrap-up satisfies even as it startles.

Given the movie’s fairly high aesthetic worth and overall moral soundness, parents may consider overlooking the language and behavioral issues noted below — as well as a briefly seedy interlude in the proceedings — to give the nod to older teens.

The film contains mature themes, including suspicions of incest, images of and references to drug use, a mild oath, at least one rough and a few crude terms and a single crass expression. The Catholic News Service classification is A-III — adults. The Motion Picture Association of America rating is PG-13 — parents strongly cautioned. Some material may be inappropriate for children under 13.