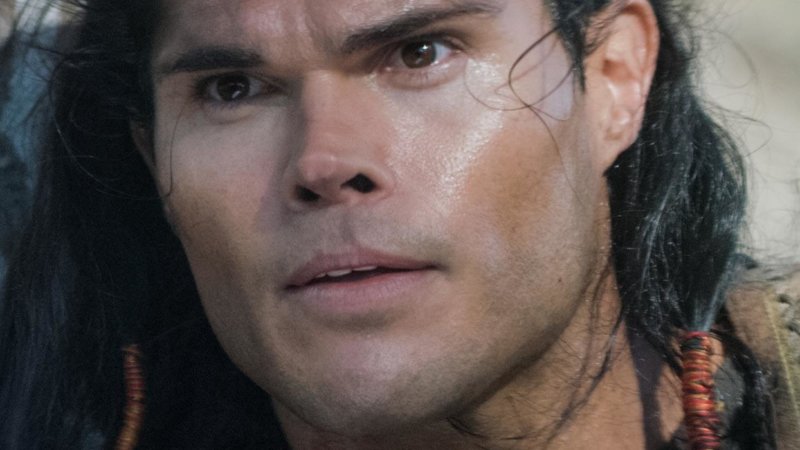 Taylor James stars in a scene from the movie "Sampson." A production of Pure Flix, the film retells the biblical epic of "a champion chosen by God to deliver Israel." (CNS photo/Pure Flix)

NEW YORK — While not suitable for the youngest viewers, the spirited biblically based drama “Samson” (Pure Flix) can provide a fine introduction to the Hebrew he-man’s story for teens.

Adults as well will find this an enjoyable riff on the exploits of Ancient Israel’s super-strong champion, affably portrayed here by Taylor James.

When not mowing down his foes, Samson skylarks with his younger brother, Caleb (Greg Kriek), and risks his family’s displeasure by romancing a Philistine, Taren (Francis Sholoto-Douglas). He takes a different tack, though, with Rallah (Jackson Rathbone), the wicked Philistine prince who, together with his deeply cynical father, King Balek (Billy Zane), embodies that people’s tyrannical and exploitative rule over the occupied Promised Land.

As scripturally literate moviegoers will remember, Samson’s biography does not end well, thanks to the infamous wiles of femme fatale Delilah (Caitlin Leahy). She gets a more sympathetic treatment at the hands of the film’s quartet of screenwriters — Zachary Warren Smith, Jason Baumgardner, Galen Gilbert and Timothy Ratajczak — than might be expected, even achieving a limited form of redemption.

Director Bruce Macdonald follows the formula of golden-age Hollywood adaptations of the Good Book with large-scale battles, a love angle (more than one, in fact) and an effete villain.

Some of the necessary expansion on the Old Testament account fails to convince. Thus, Samson wants to live the conventional life of a family man rather than follow his divinely ordained destiny and resists being raised to the quasi-monarchical office of judge. Such lack of ambition feels more like a device for introducing conflict into the plot than a genuine character trait.

The script also takes an ambivalent stance toward violence. Samson sees the oppression of the Israelites but consistently tries to adopt peaceful means to bring their Philistine rulers around. Yet the dialogue hints that God wants him to lead his fellow countrymen to war rather than resort to diplomacy.

When he’s forced into a fight, though, as he often is this version of events, Samson goes at it with gusto, thanks to his divinely infused might. These moments of more-than-human prowess are shown to descend on him in response to his frequent prayers.

Samson’s successful pleas could provide parents with an opportunity to discuss with youngsters how the proper use of their talents can be guided by prayer. His piety also comes to the fore at critical moments when things appear hopeless, another good lesson for young moviegoers to ponder.

Overall, this tale of faith-motivated derring-do is a pleasant piece of entertainment that’s appropriate for a broad audience.

The film contains much combat violence with little gore, a scene of torture and references to prostitution and womanizing. The Catholic News Service classification is A-II — adults and adolescents. The Motion Picture Association of America rating is PG-13 — parents strongly cautioned. Some material may be inappropriate for children under 13.