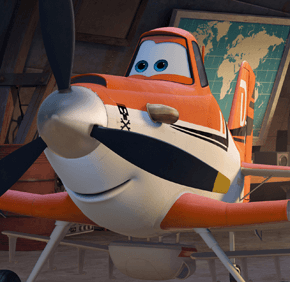 By Joseph McAleer
Catholic News Service
NEW YORK – Having conquered the world of “Cars,” Disney waves its anthropomorphic wand skyward in “Planes,” a delightful 3-D animated adventure.
Directed by Klay Hall (“Tinkerbell and the Lost Treasure”) from a clever, pun-filled script by Jeffrey M. Howard, “Planes” excels on two … well, planes. The animation dazzles with exhilarating air races over beautiful scenery, while the entertaining plot offers good lessons for kids about friendship and overcoming obstacles.
Dusty (voice of Dane Cook) is a spirited crop-duster who dreams of something better: a dazzling career as a high-flying racer. It’s a classic underdog story, with naysayers at every turn in the small town of Propwash Junction.
“I just hope to be better than what I was built for,” Dusty dreams.
He’s fast, despite being a single-prop plane, but Dusty has a potentially fatal flaw: He’s afraid of heights. That’s not normally a problem, as crop dusters fly low and slow.
But Dusty is determined to succeed. He persuades Skipper Riley (voice of Stacy Keach), a crusty veteran of wartime air battles, to train him to enter the “Wings Around the Globe” race. His non-aircraft support team includes Chug (voice of Brad Garrett), an advice-dispensing fuel truck, and Dottie (voice of Teri Hatcher), a sassy forklift and whiz mechanic.
Dusty qualifies, and is pitted against the best planes in the world. The international cast includes Bulldog (voice of John Cleese), a stuffy British plane; Rochelle (voice of Julia Louis-Dreyfus), a comely French-Canadian racer; El Chupacabra (voice of Carlos Alazraqui), a Mexican lover boy who only has eyes for Rochelle; and Ishani (voice of Priyanka Chopra), an exotic Indian flyer.
The racer to beat is fellow Yankee Ripslinger (voice of Roger Craig Smith), a devious plane who would rather crash and burn than be beaten by an upstart “farm boy.”
“Planes” zooms across the globe, from America to Europe, across the Himalayas, past China and over the Pacific to Mexico, rendering familiar sights along the way.
Adults will enjoy the many sight gags and puns. Fans follow the race on “FlewTube” using their “skyPads.” The much-maligned, cowlike tractors who were always being tipped over in “Cars” are elevated to sacred status in India and roam freely. The aircraft carrier that comes to Dusty’s rescue is the U.S.S. Dwight D. Flysenhower.
Aside from some action sequences – including stormy weather and a wartime flashback – which might cause turbulence for the youngest aviators in the audience, “Planes” is just the ticket for the entire family.
The film contains a few perilous situations. The Catholic News Service classification is A-I – general patronage. The Motion Picture Association of America rating is PG – parental guidance suggested. Some material may not be suitable for children.
McAleer is a guest reviewer for Catholic News Service.
CLASSIFICATION
“Planes” (Disney) – Catholic News Service classification, A-I – general patronage. Motion Picture Association of America rating, PG – parental guidance suggested. Some material may not be suitable for children.
Copyright (c) 2013 Catholic News Service/U.S. Conference of Catholic Bishops
PrevNext