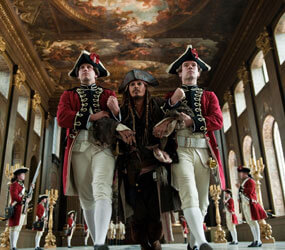 NEW YORK – The fourth movie in the series inspired by the Disneyland attraction, “Pirates of the Caribbean: On Stranger Tides” (Disney), spins a yarn that leads to the Fountain of Youth. No wonder it makes the popular franchise feel long in the tooth. While not a bust or a bore, “On Stranger Tides” would benefit from more vim and vigor.

After 2007’s convoluted, never-ending installment “At World’s End,” producer Jerry Bruckheimer hired director Rob Marshall to do just that. Known for big-screen adaptations of the musicals “Chicago” and “Nine,” Marshall is an odd choice to helm an adventure-comedy set on the high seas. Although his Broadway sensibility isn’t alien to the spirit of the often flamboyant material, a trade-off has occurred. In exchange for a leaner, more compact entertainment, this picture lacks awe-inspiring visuals and a grand scale – notwithstanding copious digital effects and it being the first in the series photographed in 3-D.

“On Stranger Tides” amounts to miniaturized hooey – the cinematic equivalent of a ship in a bottle. There’s not much memorable swashbuckling and the humor isn’t particularly jolly. Johnny Depp doesn’t appear enthused about reprising the role of foppish Captain Jack Sparrow, despite being given a worthy new love interest played by Penelope Cruz.

Much of the enervating aura can be attributed to the fact that few scenes take place on the open ocean. Marshall heightens the sense of claustrophobia by favoring medium shots and close-ups, adopting the perspective of a spectator in the front row of the orchestra section rather than that of a viewer in the back of the auditorium positioned to take in the full breadth of the spectacle. On the plus side, the scenario doesn’t attempt to incorporate previous story lines or introduce a confusing array of new characters.

In mid-1700s London, we learn of Jack’s interest in finding the Fountain of Youth discovered by explorer Ponce de Leon two centuries earlier. Reluctant to join his rival Captain Barbossa (Geoffrey Rush) on an expedition backed by England’s King George (Richard Griffiths), Sparrow is conscripted by sword-wielding old flame Angelica (Cruz). Angelica’s father is the malevolent pirate Blackbeard (Ian McShane), a character schooled in the dark arts and the only one wearing more eye mascara than Jack. They set sail aboard his vessel Queen Anne’s Revenge, crewed by zombie officers.

Meanwhile, the Spanish crown has dispatched three galleons to the island where the font of eternal life is supposedly located. The ritual necessary to unlock its regenerative powers entails obtaining a mermaid’s fresh tear. The movie’s centerpiece is an aquatic melee involving a host of these enticingly beautiful yet predatory creatures. Philip Swift (Sam Claflin), a missionary clergyman in Blackbeard’s custody, falls in love with one, whom he dubs Syrena (Astrid Berges-Frisbey).

Their romance adds a youthful note to “On Stranger Tides,” but Swift’s faith also affords screenwriters Ted Elliott and Terry Rossio the chance to fortify the plot by contrasting his theistic worldview to one rooted in magic, including voodoo, and a pagan belief in Fate. There’s considerable banter about the salvation of souls promised by Christianity and the fountain’s superficial kind of redemption. This includes some mildly provocative comments regarding religion, and Catholicism in particular. They needn’t deter potential viewers, however, especially since the values of compassion and kindness championed by faithful agents are appropriately affirmed.

And yet plotwise, the tension between theology and magic does end in a sort of a stand-off. As regards the handling of almost any substantive topic in a mainstream summer movie, “On Stranger Tides” hedges its bets, taking great care not to offend – or to say anything of real consequence.

The Catholic News Service classification is A-II – adults and adolescents. The Motion Picture Association of America rating is PG-13 – parents strongly cautioned. Some material may be inappropriate for children under 13.