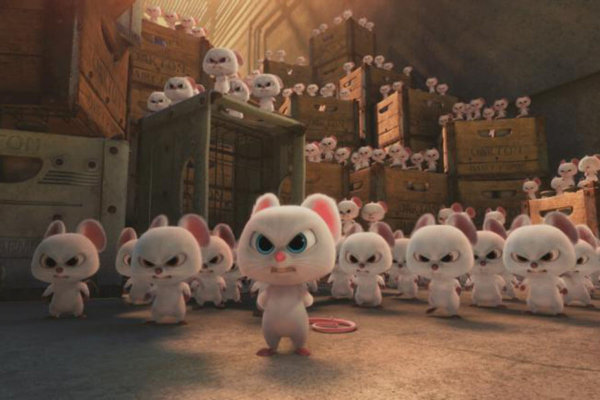 Animated characters appear in the movie "The Nut Job 2: Nutty by Nature." The Catholic News Service classification is A-II -- adults and adolescents. The Motion Picture Association of America rating, PG-13 -- parents strongly cautioned. Some material may be inappropriate for children under 13. (CNS photo/Open Road Films)

NEW YORK — Much of the action in the animated children’s comedy “The Nut Job 2: Nutty by Nature” (Open Road) unfolds at a frenzied pace. Yet, for all the sound and fury, this is in the end a bland film, unlikely to please any but the least discerning viewers.

Perhaps that’s because the folks behind this sequel (the original launched in 2014) were too focused on 3-D special effects to waste time giving their characters much personality. Ironically, those effects turn out to raise the main objection to the picture from a parent’s perspective since — together with the many menacing situations to which the plot gives rise — they may be too scary for little kids.

The less-than-dynamic duo at center stage here is made up of squirrels Surly (voice of Will Arnett) and Andie (voice of Katherine Heigl). They’re obviously destined for each other from the start. But, of course, before true love can prevail there must be a conflict for them to resolve.

In this case, it concerns the fact that Surly, his unspeaking sidekick Buddy the rat and the rest of the gang from nearby Liberty Park have long been living off the abundance of an abandoned nut shop. Andie considers this a lazy and unnatural way of life, and is pleased when the negligence of one of her fellow animals causes an explosion that destroys the derelict building.

Trooping back to their original habitat, the critters suddenly find themselves pitted against their city’s corrupt, never-named Mayor (voiced by Bobby Moynihan). Hizzoner plans to bulldoze Liberty Park and turn it into a profit-making amusement concern.

As Surly organizes the resistance to this greed-driven project, huge earthmoving machines bear down on the small creatures. Later, an unmoored Ferris wheel lumbers through the Mayor’s creation, “Liberty Land,” rapidly and spectacularly destroying his handiwork. Grownups with jittery tykes in tow, take note.

Amid all the chases and the animal-human combat, director and co-writer Cal Brunker’s script (penned with Bob Barlen and Scott Bindley) makes respectable — if hardly original — points about protecting the environment and the value of friendship and teamwork. It’s all perfectly acceptable for a wide swath of age groups.

Still, to paraphrase an old candy bar ad, sometimes you feel like a nut; this time, not so much.

The film contains cartoon violence, including explosions, recurring peril and mild gross-out and scatological jokes. The Catholic News Service classification is A-II — adults and adolescents. The Motion Picture Association of America rating is PG — parental guidance suggested. Some material may not be suitable for children.