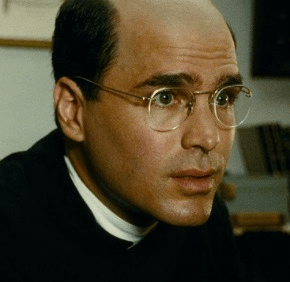 Yet, while suitable for a wide audience, director Alejandro Monteverde’s good-hearted, nostalgic parable, set in 1940s coastal California, is not without its occasional aesthetic lapses.

At its best, this tale of an undersized, bullied lad named Pepper (Jakob Salvati) who sets out to prove his faith in God by performing a series of good works is reminiscent of the 1983 holiday-themed classic “A Christmas Story.”

Whereas the protagonist of that film had no more exalted goal in mind than to receive a B.B. gun as a Christmas present, however, Pepper is angling for a far weightier objective. He’s praying for the divinely guided release of his beloved father, James (Michael Rapaport), a GI taken prisoner by the Japanese.

Early scenes narrated by the adult Pepper (voice of Barry Ford) show us the touching bond between the youthful outcast and his sympathetic, resolutely supportive dad.

Under James’ guidance and inspired by the example of his favorite comic-book and serial movie hero, Ben Eagle (Ben Chaplin), diminutive Pepper comes to believe in his own potential. Thus he’s able to give a positive response to his father’s repeated question: “Do you believe we can do this?”

In the wake of James’ emotionally wrenching departure for the war, Pepper’s kindly parish priest, Father Oliver (Tom Wilkinson), tries to help the 7-year-old recognize the difference between mere wish-fulfillment and trust in God’s providence. He presents Pepper with a list of the corporal works of mercy, and encourages the boy to carry them out as a tangible demonstration of his pious devotion.

Along with the more familiar tasks of feeding the hungry and visiting the sick, Father Oliver also requires Pepper to cleanse his mind of hatred by befriending a fellow outsider, Japanese-American widower Hashimoto (Cary-Hiroyuki Tagawa). Since his discharge from a government-run detention camp, Hashimoto has been ostracized by the local community – and threatened by some of its more hotheaded citizens.

With its lessons about persistence in belief and the need to overcome prejudice, “Little Boy” will be particularly welcomed by viewers of faith. Even those who appreciate its numerous assets, however, may note moments of forced plotting.

James, for instance, is portrayed as having essentially no choice but to take London’s place in the ranks after the latter, an eager volunteer, turns out to be flat-footed – and therefore medically unfit to serve.

There are also interludes of undeniable sentimentality. Yet this plucky and positive tale, with its affirmative presentation of the priesthood – and of Catholic life in general – makes for winning entertainment that’s well-suited to all but the youngest potential moviegoers.

The film contains scenes of combat with minimal gore and a couple of crass terms. The Catholic News Service classification is A-II – adults and adolescents. The Motion Picture Association of America rating is PG-13 – parents strongly cautioned. Some material may be inappropriate for children under 13.