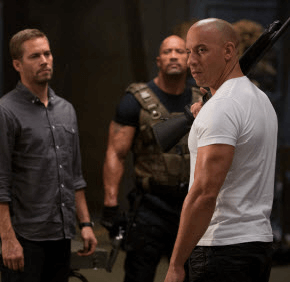 By John Mulderig
Catholic News Service
NEW YORK – The title-shifting franchise that now gives us “Fast & Furious 6” (Universal) may be unreliable where the use of definite articles and the representation of conjunctions are concerned. But its underlying recipe is far more predictable.
So it’s unlikely that potential audience members really need a review to tell them that director Justin Lin has turned out yet another barroom brawl of a movie. Or that screenwriter Chris Morgan’s script conjures up a teenage boy’s vision of the good life, an adolescent “la dolce vita” unencumbered by such killjoy detritus as stop signs and speed limits.
Those tiresome markers of conventionality have never bothered the crew of law-flouting underground car racers who make up the recurring characters of this series. And yes, their endless run-ins with the authorities may have left them on the lam from justice. But at least, as our current adventure begins, they’re living out their respective exiles in glamorous places (whence the heavy-duty product placement, in early scenes, for the tourism board of the Canary Islands).
The funds keeping them high on the hog, devotees will remember, were liberated from the coffers of bad guys during their last collective caper, staged down in colorful but corrupt Rio de Janeiro. Rio, Gran Canaria. … Oh, it’s a giddy whirl!
Still, America being home and all, it would be nice to be rehabilitated.
Well, gather round boys and girls because Federal Agent Luke Hobbs (Dwayne Johnson) has just the proposition you’ve been waiting for: Help him thwart the civilization-threatening schemes of criminal mastermind Owen Shaw (Luke Evans) – who uses hotrods to speed his heists of top-secret military equipment – and Uncle Sam will dole out pardons to everyone.
Just in case team leaders Dom Toretto (Vin Diesel) and Brian O’Conner (Paul Walker) should require further inducement, Agent Hobbs has come armed with photos – recent photos! – of Dom’s presumed-dead love interest, Letty Ortiz (Michelle Rodriguez). Far from taking the Long Nap, it turns out, Letty is alive and well – a case of amnesia perhaps excepted – and serving as Shaw’s No. 2.
Time to cut to the chase or, in this case, the well-orchestrated series of chases that constitute the very essence of the exercise. Sit back and thrill to the sight of muscle cars flashing and zooming their way through the streets of London, leaving those stodgy double-decker buses far behind.
Lin softens the prevailing tone of grunting machismo with the occasional flourish of vague religiosity. Thus the cross Dom wears around his neck becomes a symbol of his bond with Letty, and the wrap-up includes a grace over backyard barbecue.
Yet the self-determined code which these ostensible heroes substitute for civil obedience – it seems to center on loyalty to their self-created “family” – is morally dubious and certainly not for the impressionable.
The film contains murky moral values, considerable stylized violence including a scene of torture, cohabitation, partial nudity, a few uses of profanity, at least one rough term, much crude and crass language and an obscene gesture. The Catholic News Service classification is L – limited adult audience, films whose problematic content many adults would find troubling. The Motion Picture Association of America rating is PG-13 – parents strongly cautioned. Some material may be inappropriate for children under 13.
Mulderig is on the staff of Catholic News Service.
CLASSIFICATION
“Fast & Furious 6” (Universal) – Catholic News Service classification, L – limited adult audience, films whose problematic content many adults would find troubling. Motion Picture Association of America rating, PG-13 – parents strongly cautioned. Some material may be inappropriate for children under 13.
Copyright (c) 2013 Catholic News Service/U.S. Conference of Catholic Bishops
PrevNext