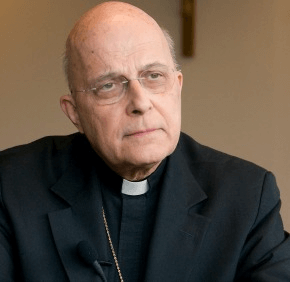 CHICAGO – Cardinal Francis E. George, the retired archbishop of Chicago who was the first native Chicagoan to head the archdiocese, died April 17 at his residence after nearly 10 years battling cancer. He was 78.

His successor in Chicago, Archbishop Blase J. Cupich, called Cardinal George “a man of peace, tenacity and courage” in a statement he read at a news conference held outside Holy Name Cathedral to announce the death.

Archbishop Cupich singled out Cardinal George for overcoming many obstacles to become a priest, and “not letting his physical limitations moderate his zeal for bringing the promise of Christ’s love where it was needed most.”

A childhood bout with polio had left the prelate with a weakened leg and a pronounced limp throughout his life.

With the cardinal’s death, the College of Cardinals has 223 members, of whom 121 are under 80 and thus eligible to vote for a pope.

“He will be deeply, deeply missed,” the archbishop said. “He certainly had one of the most penetrating analytical minds among the bishops of the United States and maybe anywhere in the world.”

Archbishop Lori commented on Cardinal George’s valiant struggle against cancer.
“He did it with great patience and love,” Archbishop Lori said. “I’m so honored to have been a part of the effort of the Knights of Columbus to recognize him in giving his eminence the Gaudium et Spes award, the highest award of the Order back in January. So, I pray that his great soul will rest in peace.”

According to Salt and Light Catholic Television Network, Pope Francis had been informed of the death of Cardinal George and will issue a telegram the morning of April 18.

Cardinal George was a philosophy professor and regional provincial then vicar general of his religious order, the Missionary Oblates of Mary Immaculate, before being named a bishop in 1990.

He was named bishop of Yakima, Washington, in 1990, then was appointed archbishop of Portland, Oregon, in April 1996. Less than a year later, St. John Paul II named him to fill the position in Chicago, which was left vacant by the death of Cardinal Joseph Bernardin in November 1996.

By retiring in 2014, Cardinal George accomplished what he often joked was his aspiration, to be the first cardinal-archbishop of Chicago to step down from the job, rather than dying in office, as his predecessors had. In the last few months the archdiocese had issued a series of press releases about changes in Cardinal George’s health status as it declined.

At an event Jan. 30 where he received an award from the Knights of Columbus, Cardinal George spoke frankly about living with terminal illness, saying that his doctors had exhausted the options for treating his disease and that he was receiving palliative care.

“They’ve run out of tricks in the bag, if you like,” he said. “Basically, I’m in the hands of God, as we all are in some fashion.”

In a catechesis session during World Youth Day in Dusseldorf, Germany, in 2005, Cardinal George told the youths that having polio at the age of 13 left him, “a captive in my own body. I soon learned that self-pity got me nowhere. Faith was the way out, because in faith I was not alone, and good can come of something that appears bad at that time.”

Archbishop Cupich in his statement also noted that when the U.S. church “struggled with the grave sin of clerical sexual abuse, (Cardinal George) stood strong among his fellow bishops and insisted that zero tolerance was the only course consistent with our beliefs.”

He observed that Cardinal George had offered his counsel and support to three popes, serving the worldwide church. In Chicago, Archbishop Cupich noted, the cardinal “visited every corner of the archdiocese, talking with the faithful and bringing kindness to every interaction.”

Pope to visit, celebrate Mass at U.S. seminary in Rome