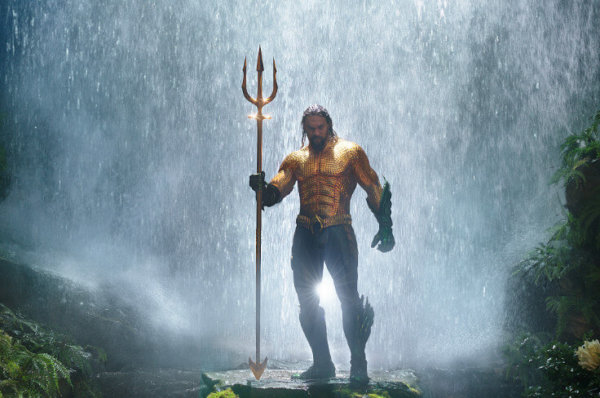 Jason Momoa stars in a scene from the movie "Aquaman." The Catholic News Service classification is A-III -- adults. The Motion Picture Association of America rating is PG-13 -- parents strongly cautioned. Some material may be inappropriate for children under 13. (CNS photo/Warner Bros.)

NEW YORK — Though he may lack a pineapple in which to dwell, “Aquaman” (Warner Bros.), as his name suggests, spends much of his time under the sea.

Viewers taking the plunge to follow his adventures will be treated to a sprawling, lush spectacle. But the DC Comics adaptation built around him also is overlong, overcomplicated and, at times, just plain dumb.

One day, way back in 1985, as early scenes show us, lighthouse keeper Tom Curry (Temuera Morrison) happened across Atlanna (Nicole Kidman), the queen of Atlantis, lying wounded on the shore. He nursed her back to health, the two wed and had a child. But shortly thereafter, Atlanna was forced to return underwater to the arranged marriage she was trying to flee in the first place.

Flash forward to the present and Arthur Curry, aka Aquaman (Jason Momoa), the now-grown offspring of this union — a forbidden one according to Atlantis’ laws — finds himself reluctantly drawn into the politics of his mother’s kingdom. Vulko (Willem Dafoe), the realm’s vizier, and spunky noblewoman Princess Mera (Amber Heard) are trying to stop Atlantis’ current sovereign, Arthur’s half-brother King Orm (Patrick Wilson), from launching a war against the entire human race.

To avert this global catastrophe, Arthur must go in search of the golden trident fashioned for Atlantis’ first ruler. This powerful weapon will help him assert his right to the throne, displace his scheming demi-sibling and secure peace for our time.

Along the watery path of Arthur’s quest, the audience learns more about Atlantis’ history, customs and various tribal subdivisions than anyone would really want to know. By the time a regiment of cavalry mounted on giant seahorses shows up, moviegoers will be chomping at the bit for action rather than backstory.

Director James Wan’s sea excursion showcases long-term marital fidelity and elevates mercy over vengeance while also deploring the ravages of marine pollution. But the dialogue in David Leslie Johnson-McGoldrick and Will Beall’s screenplay is sometimes so obvious viewers can finish characters’ sentences for them. As in: “Atlantis has always had a king, what it needs now is a … .” Fill in the blank.

Though some unnamed set of gods are fleetingly mentioned, it’s the occasional salty talk that may give the parents of teens pause. The final tally of such expressions depends in part on whether the use of a word for children born out of wedlock — bearing in mind his opponents regard the nuptials binding Arthur’s parents as invalid — is a cuss when used in the technically accurate sense.

There’s plenty of padded running time to contemplate such niceties. Whatever the verdict on that score, though, “Aquaman” is possibly acceptable for older adolescents. In fact, they’ll probably appreciate this prolonged dip in the ocean more than many a grownup.

The film contains constant harsh but mostly bloodless violence, compelled bigamy, a couple of mild oaths and about a dozen crude and crass terms. The Catholic News Service classification is A-III — adults. The Motion Picture Association of America rating is PG-13 — parents strongly cautioned. Some material may be inappropriate for children under 13.