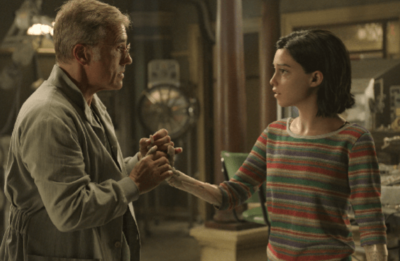 Christoph Waltz and Rosa Salazar star in a scene from the movie "Alita: Battle Angel." The Catholic News Service classification is A-III -- adults. The Motion Picture Association of America rating is PG-13 -- parents strongly cautioned. Some material may be inappropriate for children under 13. (CNS photo/Fox)

NEW YORK — Everything viewers need to know about the futuristic action adventure “Alita: Battle Angel” (Fox) is summed up in the line of dialogue that describes its young heroine, played by Rosa Salazar, as having “the face of an angel and the body of a warrior.”

If the idea of a cyborg ingenue ninja with big dewy eyes and a knockout punch seems irresistibly appealing, this is the movie for you.

Adapted from a series of graphic novels by Yukito Kishiro by screenwriter James Cameron and director Robert Rodriguez, Alita’s romantic and crusading exploits play out in the mildly dystopian, Rust Belt-like setting of a 25th-century burg called Iron City. There, Dr. Ido (Christoph Waltz), a specialist in human-mechanical fusion, finds Alita’s severely damaged and inanimate remains in a garbage dump, brings her home and restores her to life.

With no memory of her previous existence, Alita is initially at a loss to know what to do with herself, other than wander the streets expressing naive wonderment at just about everything she sees. But eventually she finds both a love interest in the person of Hugo (Keean Johnson), a street lad with a keen motorbike, and a purpose: honing her high-octane, martial arts-style fighting skills.

Alita discovers her prowess for scrapping spontaneously when Ido finds himself in danger, and she goes on to deploy it against an array of villains.

Cameron’s script makes some weak feints in the direction of pondering the divide between Alita’s two natures. And there’s some equally feeble social commentary derived from the backstory that the denizens of Iron City toil for the benefit of an elite who live in the wreck of an airborne metropolis that hovers in the sky above their hometown.

But the screenplay is primarily focused on having Alita do battle at every opportunity. Moviegoers can judge for themselves whether her clashes represent female empowerment or male wish fulfillment. Either way, the suggestion she puts forward that she has an inherent appetite for mayhem makes this inappropriate fare for impressionable youngsters.

The film contains much violence, some of it gory, partial nudity, references to narcotics, a mild oath, a couple of rough terms and several crude and crass expressions. The Catholic News Service classification is A-III — adults. The Motion Picture Association of America rating is PG-13 — parents strongly cautioned. Some material may be inappropriate for children under 13.