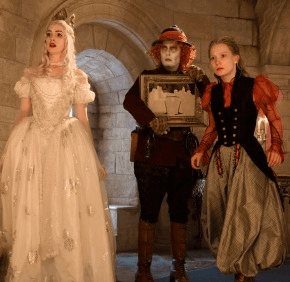 By John P. McCarthy
Catholic News Service
NEW YORK — The heroine of “Alice Through the Looking Glass” (Disney) is not Lewis Carroll’s curious 7-year-old girl but rather an intrepid sea captain with an entrepreneurial streak.
A young woman who refuses to bend to the will of a patriarchal society, Alice overcomes obstacles in both the real world and the fantasy realm of Underland thanks to her courage, empathy and appetite for risk.
More compelling in theory than in practice, the central figure in this follow-up to Tim Burton’s “Alice in Wonderland” (2010), does not contradict Carroll’s vision so much as supplant it. Viewed through a decidedly contemporary prism, presumably to satisfy a modern insistence on gender equality, she conforms to present-day social, political and cultural norms.
It’s no wonder the resulting picture feels forced and mechanical.
Despite exciting visuals, a talented ensemble, and glittery costume and makeup designs, this 3-D fantasy-adventure is inert — managing to feel audacious and tediously familiar at the same time. As for its suitability, there are enough frightening action sequences and examples of cruelty to render it inappropriate for young or impressionable children.
In the swashbuckling opening scene, Alice Kingsleigh (Mia Wasikowska) is at the helm of a ship named “Wonder,” racing to elude pirates during a fierce storm. The vessel, we learn, belonged to her late father.
Upon returning to London, however — the year is 1875 — Alice learns that her former suitor, Lord Ascot (Leo Bill), owner of the rapacious shipping company for which she’s been plying the seas, will evict her mother from their home unless he can take possession of the “Wonder.”
After receiving this ultimatum at the Ascot residence, Alice passes through a mirror into Underland, where she reunites with a gaggle of friends that includes the Cheshire Cat, the White Rabbit, as well as Tweedledee and Tweedledum.
Her pals are worried about the Mad Hatter (Johnny Depp), who has grown increasingly despondent over reports that his estranged family was killed by the Jabberwocky. Vowing to help Hatter find out precisely what befell his relations, Alice undertakes a dangerous mission that involves time travel and the pilfering of an essential device, the Chronosphere, from Time himself (Sacha Baron Cohen).
In the course of discovering what happened to the Hatters, Alice learns what caused the rift between the White (Anne Hathaway) and Red (Helena Bonham Carter) Queens. Evidently, the latter’s enormous head and volatile temperament resulted from a traumatic brain injury, an event triggered by the surreptitious consumption of tarts.
After completing her task in Underland (and rousing the Hatter from his morbid depression), Alice re-emerges in Victorian London where she is promptly branded a hysteric and put in an insane asylum. Without the aid of magic, she must find a way to protect her father’s legacy and ensure her mother’s welfare. When last seen, Alice is embarking on a career that combines seafaring and commerce.
Tim Burton serves as producer but has handed over directorial duties to James Bobin. And so, while the movie has dark shadings, it’s not overtly macabre. Nor is it satisfyingly warm and fuzzy, owing in large measure to the two lead performances.
Wasikowska is so adept at projecting stoicism, she keeps sympathy at bay. Alice’s limited interaction with the animated creatures — voiced by the late Alan Rickman, Michael Sheen, Stephen Fry and Toby Jones, among others — doesn’t soften that impression; and she’s a formidable presence alongside the seasoned actors playing her live-action adversaries, namely Bonham Carter and Cohen (who, forgive the pun, gets more screen time than his role warrants).
Wasikowska’s most significant hurdle is appearing opposite Mr. Depp’s distractingly mannered Hatter — a creepily simpering, elaborately painted, infantile figure. Anyone would come across stone-faced and emotively challenged next to this fey and feckless chap.
Adding to viewer fatigue, Depp keeps recycling the same character, with only minor variations, in film after film — not even counting his Hatter from this franchise’s original.
Screenwriter Linda Woolverton shapes Carroll’s diffuse second book into a relatively sophisticated and fairly lucid story, yet doesn’t adequately convey Carroll’s fascination with logic and wordplay. As much as her script, and other aspects of the production, may gesture toward the bizarre and exotic, moreover, she cannot forgo inserting formulaic epigrams meant to convey salubrious life lessons. It’s unclear if they’re being offered with any sincerity or conviction.
One has similar suspicions regarding the filmmakers’ outlook. Do they think Carroll’s foray into surreal fantasy and make-believe is consistent with a Christian worldview?
Could it be that a key image at the climax of “Alice Through The Looking Glass” — namely, an obvious reference to Michelangelo’s “Creation of Adam” on the Sistine Chapel ceiling — has been included to counteract these niggling doubts? If so, it’s unconvincing and only highlights how far this adaptation has drifted from its moorings.
The film contains frequent, moderately intense fantasy action, several instances of cruel behavior, and a couple of mild oaths. The Catholic News Service classification is A-II — adults and adolescents. The Motion Picture Association of America rating is PG — parental guidance suggested. Some material may not be suitable for children.
To see more movie reviews, click here.
PrevNext