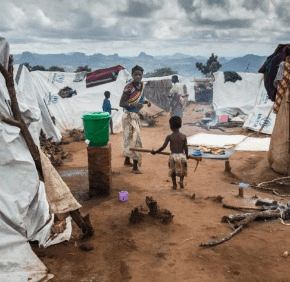 CAPE TOWN, South Africa – Albinos in a Malawi refugee camp have to be warned not to walk alone outside the camp, a church official said after a national newspaper reported the May 24 killing of a 38-year-old farmer.
The death brought to 18 the number of people with albinism killed in Malawi in the past two years.
Believed to bring wealth, the body parts of albinos are sought for use in magical rituals.
“Because of these hunters, we warn albinos to stay away from certain areas and sometimes not to leave the camp at all,” Rufino Seva, Malawi country director for Jesuit Refugee Service, said in a May 25 telephone interview from Lilongwe.
“It is very risky for them to walk alone,” he said.
Albinism is a genetic condition in which pigment is partially or completely absent from the skin. Symptoms include blindness and greater susceptibility to skin cancer.
Seva returned to Lilongwe May 25 from Dzaleka refugee camp, which hosts about 18,000 refugees from Burundi, Rwanda, Congo, Somalia, Ethiopia and Eritrea.
In Malawi, “albino refugees are extremely vulnerable,” he said, noting that albinos from war-torn countries “would not choose Malawi as a safe destination, but most have no choice.”
Those who kill albinos “are seeking to make money through selling body parts,” Seva said. A 2009 report from the Red Cross and Red Crescent Societies said the body of a person with albinism can bring as much as $75,000 on the black market. Limbs can be sold for thousands of dollars.
Local police said the farmer, Fletcher Masina, was brutally killed in his crop field in Zintabira.
His murder took place the same day as several hundred people participated in a march to Parliament in Lilongwe to seek stronger laws to protect albinos from attacks.
Ending the killings and abductions of albinos will require the concerted efforts of all Malawians, the bishops’ conference’s justice and peace commission said in a May 21 statement.
“Albinos are being abducted and killed for ritual purposes,” the commission said, noting that “graves have been exhumed and some people have been caught by the police with bones and other albino body parts.”
As well as thorough investigations by properly trained police, research is also needed “to fully understand the menace,” so that communities can be educated and albinos treated “with the dignity they deserve,” it said.
The commission said neighboring countries – including Tanzania, where similar ritual killings are perpetrated – should be consulted in the quest to stop the practice. Political, faith, traditional and civil society leaders must denounce this evil and educate people “on the dangers of practicing outdated rituals that threaten the sanctity of life,” it said.
Malawian President Peter Mutharika said May 20 that the government would employ 200 people to protect albinos, and their training will include visits to Tanzania, where, he said, attacks have been brought under control.
Albinos killed in Malawi this year include a 9-year-old boy whose head was severed from his body. Police reports show more than 50 attacks and abductions since late 2014.
An estimated 10,000 albinos live among Malawi’s population of about 15 million people.