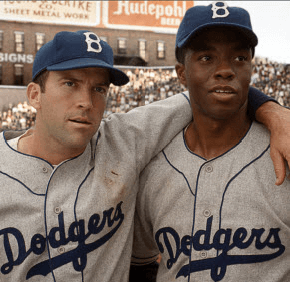 By John Mulderig
Catholic News Service
NEW YORK – To paraphrase the title of an earlier movie about the national pastime, hate strikes out in the historical drama “42” (Warner Bros.). Writer-director Brian Helgeland’s uplifting – if sometimes heavy-handed – film recounts the 1947 reintegration of professional baseball after decades of segregated play.
As Helgeland’s script shows us, this racial breakthrough – which marked a significant milestone in the onward march of the civil rights movement – was made possible by the collaborative efforts of Brooklyn Dodgers general manager Branch Rickey (Harrison Ford) and Negro League star Jackie Robinson (Chadwick Boseman).
In the aftermath of World War II, Rickey was determined to add a black player to the roster of “Dem Bums.” In Robinson – whose Dodgers uniform, once he eventually donned it, bore the number of the title – Rickey found a sportsman with sufficient character to endure all the abuse that would have to be faced to make this change a reality.
Rickey’s motivation was in part, of course, financial; in a diverse city like New York, integrated play would lead to an expanded fan base. But, if the narrative here is accurate, both his vision and Robinson’s courage also can be attributed to their shared Christian faith.
This bond is first indicated in a humorous way when Rickey, reviewing Robinson’s file, observes that everything is going to work out fine since “he’s a Methodist, I’m a Methodist, God’s a Methodist … .”
Later, in describing to Robinson the forbearance he will need to demonstrate, Rickey gravely compares it to that of “our Savior.” And, while remonstrating with a racist opponent, Rickey reminds him – albeit somewhat jokingly – that he will someday stand before God to be judged.
Catholicism is only specifically referred to in passing – and in a retrospectively curious light. Rickey learns from the commissioner of baseball that his manager, the legendary Leo Durocher (Christopher Meloni), is being suspended from the game for a year. The Catholic Youth Organization, it seems, objects to the flagrantly adulterous affair Durocher has been carrying on with his mistress. The organization’s threat of a boycott, so the commissioner assures Rickey, is not to be ignored.
Robinson’s marriage, by contrast, is shown to be both a model of success and a crucial source of support in his struggle. As he courts and marries his sweetheart Rachel (Nicole Beharie) – and as they embark on parenthood together – she proves a tower of strength to her husband, by turns egging him on and cooling him down.
Swelling music and other atmospherics occasionally convey the impression that Helgeland’s picture is too convinced of its own importance. But the proceedings are buoyed by the feisty righteousness with which Ford, in a splendid turn, endows Rickey and by the inspiring example of Robinson’s unbreakable determination.
While the elements listed below would normally exclude youthful viewers, the moral impact of Rickey and Robinson’s history-altering partnership may make their story acceptable for older teens.
The film contains an adultery theme, racial slurs, fleeting humor implicitly referencing homosexuality, a few uses of profanity, at least one crude term and occasional crass language. The Catholic News Service classification is A-III – adults. The Motion Picture Association of America rating is PG-13 – parents strongly cautioned. Some material may be inappropriate for children under 13.
CLASSIFICATION
“42” (Warner Bros.) – Catholic News Service classification, A-III – adults. Motion Picture Association of America rating, PG-13 – parents strongly cautioned. Some material may be inappropriate for children under 13.
Copyright (c) 2013 Catholic News Service/U.S. Conference of Catholic Bishops
PrevNext