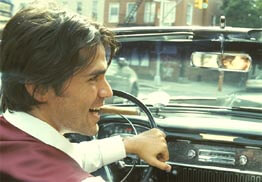 Participants in the June 28-July 1 Catholic Family Expo in Baltimore will be among the first to preview the much anticipated movie “Bella” during a June 30 screening at the Baltimore Convention Center at 7 p.m.

The producer and the movie’s lead actor – both of whom are featured speakers at the expo – will also be on hand to discuss how their shared Catholic ideology shaped their professional alliance.

“I’m glad we’re finally getting a pre-screening of the movie in Baltimore, before its release date,” said Leo Severino, producer of the movie, which won the coveted People’s Choice Award at the Toronto International Film Festival last fall and will be released nationwide in September.

Mr. Severino, a 34-year-old Los Angeles native, and veteran film actor Eduardo Verastegui, 33, have been traveling the country for viewings of the movie.

Mr. Severino described how a chance meeting with Mr. Verastegui in a Catholic church led to his current helter-skelter promotional tour.

While attending Mass in Los Angeles in 2004, Mr. Severino struck up a conversation with Mr. Verastegui, a Mexican native, and the two men realized they were in the same industry in a town that is largely devoid of religiously like-minded folks.

Having reconnected with his Catholic faith in 1999, Mr. Severino – who had been working on television projects for several years – was looking to branch into film work and Mr. Verastegui was looking for movie roles that represented his rejuvenated Catholic values.

In his homeland, Mr. Verastegui had reached stardom on a Mexican soap opera and as a singer who had toured internationally to sold-out crowds.

Since arriving in the U.S., he has appeared in a Jennifer Lopez music video, had a starring role in the 20th Century Fox movie “Chasing Papi,” co-starred in the independent film “Meet Me in Miami,” and was listed as one of People en Espanol magazine’s 50 most beautiful people in the world.

However, Mr. Verastegui said he was being typecast as the unfaithful Latin lover and eagerly joined Mr. Severino in founding Metanoia Films to produce movies that were more in line with his Catholic principles.

In the company’s first film – a multi-million-dollar production shot in an exhausting 23 days on location in New York City – “Bella” follows the romance between an international soccer star whose career is brought to an abrupt end and a waitress struggling to prosper in the country’s largest city.

“It’s about a guy who loses it all and in doing that, he finds everything,” Mr. Severino said. “It’s a love story that goes beyond romance. It’s one of redemption.”

The movie opens Aug. 15 in five Texas cities and hits theaters nationwide in 25 markets in early September, he said.

“When the Baltimore audience sees the movie, we’re hoping they can take away with them the testimony of the people in the film,” Mr. Severino said. “It’s like what Mother Teresa said: ‘We’re not called to be successful. We’re called to be faithful to God.’ If the other successes come, that is a blessing.”