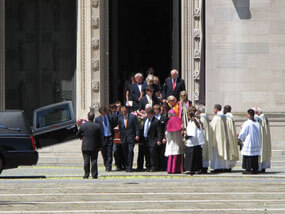 Hundreds of friends and family gathered at the Cathedral of Mary Our Queen in Homeland May 8 to celebrate the life of Yeardley Love, a senior lacrosse player at the University of Virginia and 2006 graduate of Notre Dame Preparatory School in Towson.

Love was found dead May 3 in her off-campus apartment, the victim of what police called an apparent homicide.

Fellow teammates from the University of Virginia were among the many mourners who attended the 22-year-old senior’s funeral, as were NDP students who wore their blue-and-white school uniforms and saddle shoes.

As a brisk wind kicked up swirls of leaves, the steady stream of people ascended the steps of a cathedral still adorned with black bunting from the recent death of Archbishop William D. Borders.

At the family’s request, media were not permitted to enter the cathedral for the nearly 2-hour liturgy. Father Joseph Breighner provided a copy of his homily to The Catholic Review.

“She never made fun of anyone,” he said. “She always wanted others to feel good.”

Love’s family and friends can honor her life by living their best lives, he said.

“In memory of Yeardley, make the better choices from now on,” the priest said. “Choose kindness instead of cruelty. Choose forgiveness instead of vengeance. Choose love instead of hate. Choose the right thing instead of the wrong thing.”

Father Breighner did not mention George Huguely, the University of Virginia senior lacrosse player who has been charged with first-degree murder in Love’s death. Yet, the priest urged mourners to think of forgiveness.

The funeral program featured a cover photograph of Love as a young girl wearing an angel costume. Beneath the photo was a sentence from Love’s senior yearbook quote: “Truly great friends are hard to find, difficult to leave and impossible to forget.”

The program also included a copy of an essay written by Love when she was a freshman at NDP. In it, she wrote that family was “very important” to her and that her parents taught her many values in life.

“My family is very close,” Love wrote, “and we like to go to church every Sunday together. I used to attend St. Joseph’s (in Cockeysville) from first grade to fifth grade, so we went to Mass at St. Joseph’s Church, but now we go to Mass at the Church of the Nativity (in Timonium).”

Love noted that she began playing lacrosse at age 5, with her father. She also mentioned her dream of playing for the University of Virginia.

“So far, my life has been filled with joy and happiness,” she wrote, “and I hope to keep living my life that way.”

As he left the funeral, Hal Riedl called the liturgy the “most beautiful funeral” he had ever attended. He was inspired by Father Breighner’s homily.

“We need to make the rest of our lives a memory to her,” said Riedl, whose daughter, Alexandra, attended NDP with Love.

Contributions may be made to The Yeardley Love Memorial Fund at Notre Dame Preparatory School, 815 Hampton Lane, Towson MD, 21286.