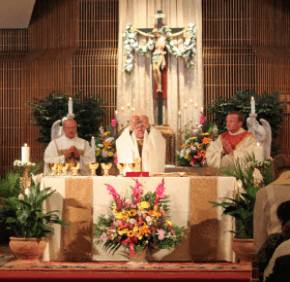 By Elizabeth Lowe
elowe@CatholicReview.org
Twitter: @ReviewLowe
HALETHORPE – Like her fellow parishioners, Mary Hoban, who has called Church of the Ascension her spiritual home for more than five decades, has dedicated herself to various parish groups over the years.
“It’s all volunteer (work) and people want to do it, they want to see this parish thrive,” said Hoban, 53. “We’re a very faith-filled community; we’re very welcoming to visitors. We all love the parish – that’s why we do what we do.”
The Baltimore County parish, established in 1913, is celebrating its 100th anniversary this year.
Baltimore Auxiliary Bishop Denis J. Madden celebrated the parish’s centennial Mass May 12, Mother’s Day, and when the feast of the Ascension of the Lord is observed in churches throughout the Archdiocese of Baltimore.
To celebrate the milestone, centennial activities include a parish picnic at Patapsco Valley State Park in Ellicott City next month, a trip for youths to Hersheypark in September and a bus trip to New York City in December.
Baltimore Archbishop William E. Lori will close the year-long celebration in December when he celebrates Mass during his first visit to the parish, said Father John A. Williamson, pastor of Church of the Ascension for five years and St. Augustine in Elkridge for two years.
“There’s a great sense of community (here),” Father Williamson said. “People step up to the plate.”
“Parishioners really take ownership of this parish,” said Hoban, who attended the former parish school. “If Father (Williamson) says we need something, he gets it. People are very generous.”
Hoban is quick to praise Father Williamson.
“Father has done a lot for the parish,” she said. “He’s a great homilist, a good administrator and a good leader. We’re very lucky to have him.”
The parish began as a mission to St. Clement Parish, according to Ascension’s parish history. A church was completed May 1, 1913, Ascension Thursday, and dedicated four months later by Cardinal James Gibbons, archbishop of Baltimore. In 1926, construction began on a three-level building to house a chapel, school and social hall.
Twenty families were listed on the mission parish’s initial registry, according to the parish history. Today, Ascension Parish has grown to about 900 families.
The parish school, Ascension School, educated students for more than eight decades before closing in 2010.
“It’s been a challenge to keep the younger families,” Father Williamson said. “Now that we’re linked with St. Augustine, a lot of the children ended up going to St. Augustine (School).”
Church of the Ascension and St. Augustine Parish collaborate for religious education classes, youth group and sacramental preparation, Father Williamson said.
“They are two separate entities but try to unify resources to offer better services to everyone,” Father Williamson said.
Thomas Pugh, an Ascension parishioner for 37 years, called his church “the friendly parish.”
“The friendliness, the opportunity to live out your faith, the guidance from the parish and different adult education programs, small group faith activities – they encourage people to volunteer and get involved,” said Pugh, 71, whose wife and three sons attended Ascension School. “We look to the future, to continue our friendliness.”
Also see:
Couple reveals their secret to a lasting marriage
Copyright (c) May 13, 2013 CatholicReview.org
PrevNext