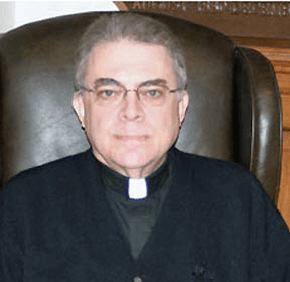 By Catholic Review Staff
Monsignor Steven P. Rohlfs, rector of Mount St. Mary’s Seminary in Emmitsburg, has been elevated to the rank of protonotary apostolic by Pope Benedict XVI.
Monsignor Rohlfs is the only active American seminary rector to receive this papal designation, the highest honor bestowed upon a priest, according to information from the Mount.
“I am truly touched by the thoughtfulness of the Holy Father and Bishop Daniel Jenky of Peoria,” Monsignor Rohlfs said in a statement. “I consider this as much an honor given to the seminary as given to me.”
The original seven apostolic protonotaries were appointed by the pope in the fifth century and were members of the immediate papal household, according to information from the Mount. By the 19th century, the papacy had extended the honor to senior priests outside of Rome with exceptional ecclesiastical responsibilities at the diocesan, regional or national levels.
Monsignor Rohlfs was named a prelate of honor in 1993, a Knight Commander of the Holy Sepulcher in 1997 and a Knight of the Sovereign Military Constantinian Order in 1999, according to information from the Mount.
In 2004, Cardinal William H. Keeler, former Archbishop of Baltimore and former seminary chancellor, named Monsignor Rohlfs rector of the Mount seminary, according to information from the Mount. A theologian, Monsignor Rohlfs has written articles in his field of medical ethics, health care, family planning and key medical issues confronting the church today. Over the years, he has served as a pastor, high school chaplain, vocation director and in the marriage tribunal.
“The Mount St. Mary’s community is delighted to share in this news with Monsignor Rohlfs,” Thomas H. Powell, president of the Mount, said in a statement. “His vision in guiding the seminary’s mission of intellectual, human, spiritual and pastoral formation, and the continued success of our seminarians, is a direct result of his leadership and priestly ministry.”
Mount St. Mary’s Seminary is the largest seminary in the U.S., with more than 170 men from 28 dioceses and two religious orders studying for the priesthood, according to information from the Mount.
For more articles on business news, click here.
Also see:
Papal nuncio visits Mount St. Mary’s
Feb. 20, 2013 CatholicReview.org
PrevNext