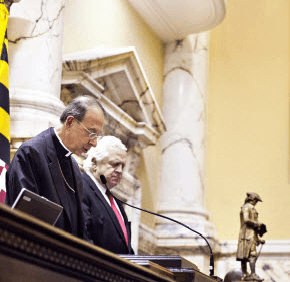 By Maria Wiering
mwiering@CatholicReview.org
Twitter: @ReviewWiering
ANNAPOLIS – Death penalty repeal, gun violence and abortion topped the issues Maryland Catholics discussed with their state lawmakers Feb. 18 during the Maryland Catholic Conference’s annual Lobby Night.
The event began in the afternoon at St. John Neumann with prayer and briefings from MCC staff on legislation related to pro-life issues, education and social concerns. Following the presentations, Catholics met with their lawmakers to advocate for laws reflecting Catholic social teaching.
Baltimore Archbishop William E. Lori and auxiliary bishops Mitchell T. Rozanski Denis J. Madden were among the state’s bishops who attended the event. Archbishop Lori is chairman of the MCC, which advocates for public policy on behalf of the state’s bishops.
“The principle that undergirds all of our advocacy efforts in the public square is the reasoned recognition that every life is sacred, from the moment of conception until natural death, and should therefore be protected by our civil laws,” Archbishop Lori said.
“Whether it is repealing the death penalty, ending late-term abortion, protecting a safety net for the poor, reducing gun violence, or ensuring that every child has access to a quality education, we are here tonight to witness to our belief that all life has promise, all life has hope,” he added.
To view a slideshow, navigate the arrows below.
More than 300 people attended the event, which was previously held downtown at St. Mary, but moved to St. John Neumann to accommodate a larger crowd. Auxiliary Bishops Barry C. Knestout and Martin D. Holley from the Archdiocese of Washington also attended.
Maryland includes the Archdiocese of Baltimore and parts of the Archdiocese of Washington and the Diocese of Wilmington, Del.
After the policy presentations, Peggy Whyte, a parishioner of St. Louis in Clarksville, led a group from District 13 to meetings with their representatives. In Sen. James N. Robey’s office, they took turns introducing issues and asking the senator’s positions.
Robey, a Democrat and former Howard County chief of police, said he disagreed with the group that the state death penalty should be repealed.
“I just can’t get some of the horrific things I’ve seen out of my mind,” he said.
He wants the sentence to remain on the books to punish the most heinous crimes, he said, but told the group he thinks the appeal legislation will pass this session.
Sen. Robey also promised to consider legislation requiring the state to collect abortion statistics; ending legalized abortion after 20 weeks of gestation, when a fetus can feel pain; and supporting adoption awareness for single mothers.
He showed the group a photo of his grandson, who was adopted. “I’m 99 percent sure I’ll be supporting that” he said of the adoption awareness bill.
The group also discussed protecting funding for nonpublic school textbooks and social safety net programs.
“The poorest of the poor are near to our hearts,” said Whyte, a clinical psychologist and past president of the Mental Health Association of Maryland who worked 19 years for Catholic Charities of Baltimore. “It’s just a very ominous time for the poor.”
In the House Office Building, Deacon George Sisson, who ministers at Holy Family in Middletown, said he has attended several Lobby Nights because it allows effective communication with lawmakers.
“There’s nothing like face-to-face,” he said.
Sisson, his wife Dinah, and other Frederick County Catholics in District 3 met with Del. Patrick N. Hogan, a Republican and member of St. Katherine Drexel in Frederick.
The group discussed death penalty repeal and abortion-related issues before addressing gun violence. The MCC supports “reasonable gun control efforts,” including banning assault weapons and reducing ammunition magazine rounds, licensing handguns, and increasing mental health services for those in need.
Several Catholics meeting with Del. Hogan disagreed with the MCC’s position on assault weapons, while others encouraged more strident measures. Hogan said he supported some types of gun control, but did not support the current legislation as introduced by the governor’s administration.
Lobby Night culminated in two official prayers offered by Archbishop Lori – the first an opening prayer in the Senate Gallery at the beginning of the evening’s session, and the second for an annual Presidents’ Day ceremony in the Old House of Delegates Chamber attended by Gov. Martin J. O’Malley.
For the session’s opening prayer, Archbishop Lori adapted a prayer for government, penned in 1791 by the United States’ first Catholic bishop, Archbishop John Carroll of Baltimore.
Historical ties also took center stage during the Presidents’ Day ceremony. Gov. O’Malley reflected on the life of George Washington, who resigned his commission as commander-in-chief of the Continental Army before Congress in the Maryland State House in 1793, and who would reject today’s hedonism and political divisions, he said.
Archbishop Lori teamed with Gov. O’Malley Feb. 14 to testify before Senate and House committees in support of death penalty repeal. The MCC has advocated for repeal for many years, but is hopeful that legislation could pass this session, said Mary Ellen Russell, the organization’s executive director.
The archbishop told lawmakers there are many “worthy arguments” for death penalty repeal, but that the faith community’s perspective “goes beyond these issues.”
“While those who have done terrible harm to others deserve punishment, we urge a response that meets evil with a justice worthy of our best nature as human beings, enlightened by faith in the possibility of redemption and forgiveness,” he said.
Related article:
Bishops, lawmakers gather for social early in 2013 legislative session
Copyright (c) Feb. 19, 2013 CatholicReview.org
PrevNext