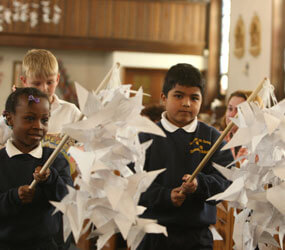 Chris Godish calls it the most terrifying experience of his life.

The 32-year-old English teacher and Mount St. Joseph alum was working with students at a middle school in Takahagi City, Japan, when the March 11 magnitude-9 earthquake struck. Godish couldn’t stay on his feet as he, other teachers and students were tossed by the quake.

“I didn’t think anything like that was possible,” Godish said. “I had no mental reference for that kind of power.”

In the weeks that followed, there were food and water shortages and power outages. Godish’s 490-student school, located on a mountain, was unaffected by the tsunami that followed the quake. Less than 50 miles from a crippled nuclear power plant, however, it was susceptible to possible radiation leaks – a frightening prospect for the people of the region.

After more than 10 days of uncertainty in Japan, Godish returned to Baltimore March 21. He was reunited with his mother, Hope Godish, at Washington Dulles International Airport. Hope Godish, a parishioner of St. Gabriel, Woodlawn, had told her son to pray when she reached him by telephone after the quake.

“I don’t think I prayed any more in my life than in that first week,” said Godish, who was raised at St. Lawrence Parish in Woodlawn. St. Lawrence has since merged with Our Lady of Perpetual Help to form St. Gabriel.

“When I really felt lost and didn’t know what to do,” he said, “I found myself taking quiet moments to relax my mind and pray.”

Godish spent the first night after the quake outside, near a campfire. After his school was inspected the second day, its first floor classroom and gymnasium served as an evacuation center for 800 people. None of the students at his school lost their lives in the quake.

There were at least 130 aftershocks in the days that followed the quake, Godish said, including some that were Magnitude 5.

“I was talking to my girlfriend a week after the earthquake,” he remembered, “and I felt like my body wouldn’t stop shaking.”

Godish praised the Japanese for their resiliency in the face of disaster. There was no rioting or looting and very little complaining, he said.

“It’s characteristic of the Japanese,” said Godish, who has taught in Japan for four years and plans to return to the Asian nation April 5. “People were more concerned with cleaning up things that were damaged and making sure the elderly were cared for.”

Godish said he was grateful to learn that many people in Baltimore were praying for his safe return. During a March 16 Mass at St. Gabriel, a special prayer was offered for Godish, his family and all those affected by the tragedy in Japan.

“Please keep the people of Japan in your prayers,” Godish said. “Many died and many won’t be found. It’s really a bad situation.”
Click here for a story on how parishes and schools are working to support Japan.