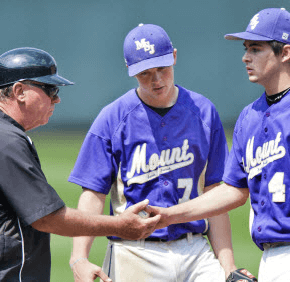 By Paul McMullen
pmcmullen@CatholicReview.org
Twitter @ReviewMcMullen
Dave Norton guided the varsity baseball team at Mount St. Joseph High School from 1983 through last spring, but it came time to hand off that duty after his recent promotion to principal of the Irvington school.
Norton, who won 603 games in 31 seasons as the Gaels’ coach, made official his retirement from coaching Aug. 14. He will be replaced in the dugout by assistant coach Jody Harris, who teaches social studies at the school.
“The responsibilities of being a principal are tremendous,” Norton told the Catholic Review. “My team is now the entire Mount St. Joseph community.”
Norton, 60, was a 1971 graduate of Mount St. Joseph, where he played varsity lacrosse. He returned to the school in 1975 as a math teacher, cross country coach and J.V. baseball coach.
Twelve of his teams finished atop the A Conference regular-season standings in the Maryland Interscholastic Athletic Association and its predecessor, the Maryland Scholastic Association. He sent 31 players on to professional baseball, including four to the major leagues, most notably New York Yankees first baseman Mark Teixeira and catcher Steve Clevenger, who’s in the Orioles’ system.
“Mount St. Joseph baseball has been a large part of my life for 38 years,” Norton said. “I have been so blessed to have a career in coaching that long. I have always considered myself a teacher before anything else.”
Norton had several nationally ranked teams and directed the Brooks Robinson All-Star Classic, a showcase for high school seniors, but talked about lessons that are not measured in wins and losses.
“Baseball mirrors life; ups and downs, struggles, challenges, triumphs, disappointment, they are all part of the game,” he said. “If you can handle that, it will help you in real life. I hope I have imparted that to my players.
Norton, a parishioner of Our Lady of the Chesapeake in Lake Shore who was raised at St. Jane Frances de Chantal Parish in Pasadena, noted faith’s part in interscholastic athletics.
“God has to be at the center of your life,” Norton said. “It is because of Him that we have the talents that we are called to share. God gave me the talent to teach, and through Mount Saint Joseph, I have had the opportunity to touch the lives of so many people both on and off the field.”
Norton will be reunited with many of his former players Aug. 17, at 1 p.m., when Mount St. Joseph holds its Alumni Game.
Also see:
Westminster Knights spice up fundraising with annual crab feast
PrevNext