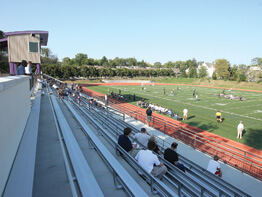 Mount St. Joseph High School president Brother James M. Kelly, C.F.X., recently approached a longtime supporter of the school with a request that might not be too popular in these days of financial belt-tightening.

“I have a question for you,” Brother James said to the man.

Before he could even finish his sentence, the man said, “Oh, Brother, I knew this was coming. I already put some money to the side for it.”

The supporter became another donor to the Irvington school, which is transforming its athletic facilities with a three-tier capital campaign. The completion of the first phase will be marked Oct. 25, when the Gaels will play their Homecoming football game against Calvert Hall, meet Archbishop Spalding in boys soccer and formally dedicate renovated John M. Plevyak Field.

Its improvements include a 1,000-seat stadium, a state-of-the-art turf field and a resurfaced track. There’s also a new bridge, connecting school buildings to the athletic fields.

“It says Mount St. Joseph’s is here to stay and has a commitment to Baltimore and Irvington,” said Emily Rollins, the school’s executive director of development. “Alumni response to the campaign has been really wonderful. “They are really behind us in this campaign.”

With the completion of the first phase, the school turns its attention to replacing Memorial Gymnasium and reorienting the baseball field to face the school.

Memorial Gymnasium, the second-oldest building on campus, will remain in use while a new field house is built in the next few years. The old gym will eventually be gutted and reused for other purposes.

Brother James said the new facilities have created a genuine buzz on campus.

“There’s a rivalry between the teams about who wants to practice on the new field,” he said with a laugh.

Fundraising can be a challenge in tough economic times.

“You just have to keep going and keep tapping into people’s generosity,” Brother James said.