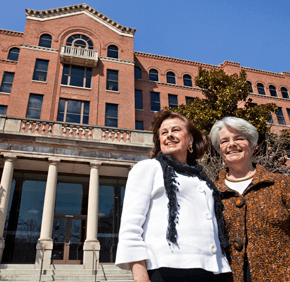 Mary Alma Dill Sullivan walked out of the Mount Washington Conference Center, stood in a courtyard atop a rolling hill under a brilliant blue sky and envisioned the setting in the early 1960s.

“It was something to walk up the hill every day,” said Sullivan, 67. “It was very special.”

Sullivan is a member of the Class of 1963 at Mount St. Agnes High School in Mount Washington, the final class to graduate from the all-girls Catholic school. The women are celebrating their 50th reunion this month with a sold-out luncheon April 20 at the conference center.

Sullivan, co-chairwoman of the 50th reunion of the Class of 1963 and class secretary, said planning the reunion has “brought us back together. It’s very exciting. The greatest thing for me is the memories.”

The Mount Washington Conference Center is on the grounds of the former school, which was operated by the Religious Sisters of Mercy.

Of the 78 students who graduated from Mount St. Agnes in 1963, nearly 40 are expected to attend the reunion, said Mary Lou Toohey, a graduate of the Class of 1963, co-chairwoman of the 50th reunion and president of the Mount St. Agnes High School Alumni Association.

The event, Toohey said, is expected to include graduates from nearly every class from 1943 to 1963 and Religious Sister of Mercy Mary Christopher Bourke, the school’s former principal and a teacher.

“The Class of ’63 has always been special to me because it was our last class,” Sister Mary Christopher wrote in an email to the Catholic Review. “They have always been leaders in the alumnae activities, a closely-knit group who have been close to the Sisters of Mercy through the years.”

Toohey, one of more than a dozen in her family who attended the school, said she wasn’t given another choice.

“There was no other place,” she said. “We had wonderful times.”

Mary Lee Hilgartner, a graduate of the Class of 1963, said she is still very close to her three best friends from high school.

“It’s the friendships and the spirit of the Sisters of Mercy,” she said.

Hilgartner, 67, is helping to plan an April 21 Mass at The Villa in Towson to honor deceased classmates. The celebrant will be her son, Monsignor Richard B. Hilgartner, an Archdiocese of Baltimore priest who serves at the U.S. Conference of Catholic Bishops in Washington, D.C., as executive director of the Secretariat of Divine Worship

In 1982, the United States Fidelity and Guaranty Company (USF&G) purchased the property, according to a USF&G history booklet about the site.