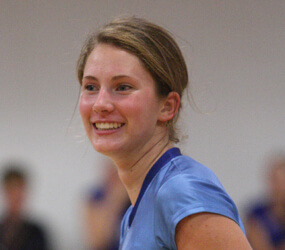 Katy Buck has lived in the shadows of tradition since she enrolled at Mount de Sales Academy three years ago.

She is the last of five sisters to attend the Catonsville institution on Academy Road, but Katy cemented her own legacy.

This week’s selection for The Catholic Review’s “Putting the STUDENT in Student-Athlete” honor, Katy has a 4.2 grade point average and is a key component of a volleyball team that is the defending champion in the Interscholastic Athletic Association of Maryland A Conference.

“I really feel that positive vibe around her, no matter what,” said coach Monica Owensby of her senior leader. “The girls have looked up to her since she was a freshman. They’ve seen her as this one person that’s like, ‘Wow, I want to be like her.’”

Katy has accepted a scholarship to play at Towson University. During her junior season, the hitter had 230 digs, 159 kills, 15 aces and 12 blocks to become an All-Metro selection by the Baltimore Sun.

“It’s a gift in her that she can play this game,” Owensby said. “The girls see it and they feed off of that. It only makes our team better. We grow from her. If something ever bothers her, she uses the game to vent.”

Katy, who is class chaplain, president of school Sodality, leads a local prayer group for teens and is a member of Teens for Catholic Action, is always seeking academic and athletic balance.

“It can be tough at times, but I know what I have to do,” said the parishioner of St. Agnes in Catonsville. “I don’t like to go halfway on anything. I stay up late if I need to and get stuff done.”

Katy says her experience at Mount de Sales has been mentally and spiritually fulfilling.

“I’ve grown up here, basically,” Katy said. “I used to be a little cheerleader at basketball games. This is such a faith-filled community. It’s neat to finish up the family line here.”