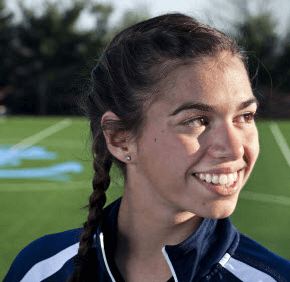 CATONSVILLE – Jessica Harris follows the example of her parents, who live out their Catholic faith.

The Mount de Sales Academy junior is the daughter of First District U.S. Rep. Andy Harris and Cookie Harris, who is involved with pro-life work.

“They’ve been big role models for me,” said Harris, a parishioner of St. Joseph, Cockeysville.

Harris, who called coming to Mount de Sales “a great decision for my faith,” is a student leader for Teens for Catholic Action, the school’s service organization. She attends daily morning Mass at the school with her peers “when traffic (during the commute from Cockyesville to Catonsville) allows.”

“It’s a sacrifice from everybody to send me here,” she said.

A member of the school’s Student Government Association, Harris was president of the sophomore class and is secretary of the junior class.

The 16-year-old volunteers with Maryland Right to Life and the March for Life on both the national and state level. She also volunteers at Pregnancy Center North in Towson with her mother, president of the center’s board of directors.

Last summer, Harris attended a week-long service trip to West Virginia where she performed manual labor. She hopes to go on the trip again next summer. Harris, who often organizes service activities, said “it was really nice to be able to get out (and participate).”

Harris, who attended St. Joseph’s parish school from kindergarten through eighth grade, is active in youth ministry and Vacation Bible School at her church.

A National Honor Society member, the junior has a 4.37 GPA and takes advanced placement courses. She may pursue a career in medicine.

“I just wanted to try it out,” said Harris, who didn’t run before high school but has become a champion.

She was the Interscholastic Athletic Association of Maryland B conference cross country champion in 2010 and 2011 when Mount de Sales took the team titles. She won IAAM indoor and outdoor track titles in the 800-meter run as a sophomore, running a strong 2 minutes, 14.92 seconds in the spring.

“She is one of those well-rounded talents,” Williams said. “It helps raise the bar. A number of the other girls on the team, they see what Jess does and they aspire to that level.”

Judi Lanciotti, the school’s vice principal of student affairs, described Harris as “modest,” “humble” and “a great leader” in the classroom and on the athletic field.

“She’s a
great role model in every aspect for the student body,” Lanciotti said.