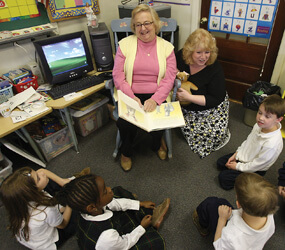 Our Lady of Mount Carmel Elementary School and Children’s Center principal Lisa Shipley leaned back in her chair inside her small office and opened the back door.

She does it every once in a while so she can see some of her self-described “babies” populating one of the kindergarten classes across the hall.

She smiled and asked, “Isn’t this the best?”

Others are noticing special happenings at Mount Carmel, which will be one of 12 schools across the country to receive a Catholic School For Tomorrow Award for Innovations in Education from Today’s Catholic Teacher Magazine April 15 in Anaheim, Calif.

Mount Carmel was cited for the children’s center located at the former Our Lady Queen of Peace School, which grew out of the closing of the latter two years ago. As enrollment declined at the neighboring Middle River school, the pastors and leaders of both parishes met to plan for the future and involved Ms. Shipley, the 2008 Archdiocese of Baltimore Distinguished Principal of the Year.

“The original conversation was about what we can do to take care of these families that are still such a part of the school,” Ms. Shipley said of Our Lady Queen of Peace. “I pitched it as, let’s think outside the box. You’re going to have an empty building and that’s not good.”

New homes brought young families to the area, and Mount Carmel’s elementary school was turning away families from the pre-kindergarten program because the classroom size was too small. The children’s center was created.

Now nearing the completion of its second year, the center has about 100 children starting at 6 weeks old. The pre-kindergarten classes were moved to Queen of Peace where space was plentiful.

“We wanted to give that sense of hope that while (Queen of Peace) is closing, it’s not exactly a closing,” Ms. Shipley said. “It’s the start of something new and fresh. Many of the children from Our Lady Queen of Peace elementary school came here.”

Ms. Shipley and other staff members dart between campuses throughout the day. The principal also teaches eighth-grade music and a studies enrichment class.

Ms. Shipley said Monsignor Robert L. Hartnett, pastor of Mount Carmel, and Father Jason Worley, pastor of Our Lady Queen of Peace, have been steadfastly supportive of the school’s efforts. Parents take a large role in making both campuses succeed as well.

“All of it sets the tone for this place is important, the work that we do is important,” Ms. Shipley said. “I have a wonderful staff. They are Cracker Jack. God graces us with beautiful, gifted children, so that’s the big thing. It’s not one person’s effort.”