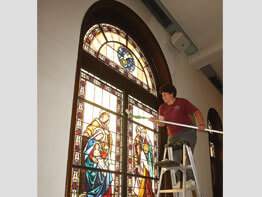 Worship habits are regaining a sense of normalcy at Our Lady of Mount Carmel in Essex, where an organ fire disrupted the Mass schedule on Father’s Day, June 15.

According to Karen Weber, the business manager at Mount Carmel, a part on the church’s pipe organ began to smolder on the morning of June 15. The situation was exacerbated by its location in the choir loft.

“Unfortunately, the fire was right next to an air-conditioning intake,” she said, “smoke filled the church so rapidly.”

With fire crews on the scene, the Mount Carmel staff moved the 10 a.m. and noon Masses to the school cafeteria. The pipe organ isn’t used at the 7:30 a.m. Mass, which was celebrated without incident.

The June 21-22 Mass schedule, which was preceded by a wedding, returned to normal at the church.

“Everything was fine,” said Father Joe Kitko, a retired priest in residence at Mount Carmel.

Ms. Weber praised the response from the facilities management office of the Archdiocese of Baltimore.

“The archdiocese was really fast on this,” she said. “Crews were out here the next day, assessing the damage. With the smoke damage, we need to wipe down the walls throughout the church. We’re still unsure of the damage to the organ.”

Ms. Weber spoke for Monsignor Robert L. Hartnett, pastor, who is on retreat.