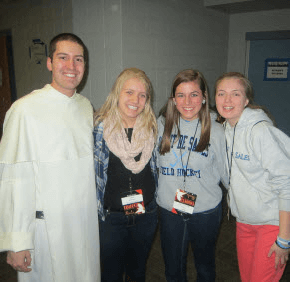 EMMITSBURG – Christa Rohr felt her relationship with Jesus had been strengthened less than 24 hours after she arrived for a weekend retreat.

“Since I’ve been here, I’ve grown deeper in my faith,” said Rohr, 14, a parishioner of St. Mary in Hagerstown.

This was the second time Rohr attended Mount 2000, a Eucharistic retreat for high school students at Mount St. Mary’s University and Seminary. Seminarians first held the retreat in 1996 in preparation for the jubilee year 2000.

About 1,300 youths and more than 300 adults attended the retreat Feb. 8-10, said Chris Perrella, Mount 2000’s chairman and a Mount seminarian. While nearly 600 participants were from the Archdiocese of Baltimore, youths traveled from as far north as Rhode Island and as far south as North Carolina.

“I hope that they encounter Jesus Christ and that they begin to establish a real relationship with him so that their faith is not just something that they do,” Perrella said.

Third-year theology seminarian Matthew Hoelscher called the retreat “an amazing pastoral experience for us (seminarians). It helps us to see the love and the joy, the youthfulness of the Catholic faith.”

During a female-only talk Feb. 9 about “Being a Woman of the Spirit,” Francois spoke to a few hundred young women about self-worth.

“He’s (God) always there waiting,” Francois said. “Ladies, God the father does not reject us.”

She urged them to respect their bodies and to remain virgins until marriage.

“We are tempted to settle and God is sad when you settle,” Francois said. “God has amazing plans for all of you. You are beauty and your beauty is power.”

Hart spoke to youths about discipleship and living a life of faith.

“Being a disciple, it’s the greatest joy,” Hart said. “You can live a vibrant life and be a Christian.”

He talked about self-restraint, from abstinence to avoiding too much junk food.

“You are a young adult and God wants to use you,” Hart said. “It all starts with you. Do you want to live a life of joy … or are you going to stand there and choose death? It’s the choice of the disciples.”

This year’s theme – Ignite – lived up to its name as youths were visibly excited about their faith.

Casey Ross, a senior at Mount de Sales Academy in Catonsville who attended Mount 2000 for a third time, said “it always reminds me of why I love Christ.”

Samantha Sullivan, a parishioner of St. Jane Frances de Chantal in Pasadena and a senior at The Catholic High School of Baltimore, said “I really like the atmosphere, going away for the weekend to reconnect with God and my spiritual side.”