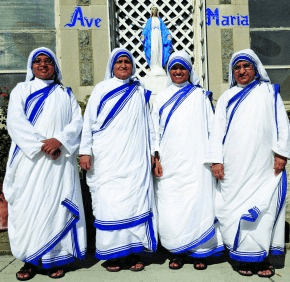 From the pictures of her that decorate the walls to the cup, plate and flatware she used when she opened the place in 1992, the presence of Blessed Mother Teresa of Kolkata pervades the Gift of Hope, the home she established at St. Wenceslaus Parish for those afflicted with AIDS.
“I used to read about her in the papers,” said Missionaries of Charity Sister Christea, one of four members of the order – founded by Blessed Teresa in 1950 – who manage the Gift of Hope and care for its five residents, the majority of whom suffer from HIV.
Blessed Teresa is set to be canonized Sept. 4 in Rome.
Sister Christea got to know the woman widely known as Mother Teresa after she joined the Missionaries of Charity in 1981 and moved to their mother house in Kolkata for formation. No matter how long-serving, it seems that the Missionaries of Charity always remember that grueling process.
“I was thinking about traveling around the world as a missionary,” said Sister Cecil Ann, house superior at the Gift of Hope, who joined the order at age 17. “Actually, I found out what work is.”
Sister Christea acknowledged that Blessed Teresa indeed lived up to her reputation as being tough, but her soft side was not reserved solely for the poor.
“She was very motherly, I can say,” Sister Christea said. “She always gave you all of her attention if you talked to her – she was fully present.”
Blessed Teresa’s sisters were and are poor themselves, following an example set by their foundress.
The four Missionaries of Charity fill their days at Gift of Hope with prayer and work.
“These are pretty nice nuns,” said Eric James, a 56-year-old resident of the Gift of Hope who has spent several stretches of his life at the home since it opened.
At the blessing ceremony in 1992 presided over by Cardinal William H. Keeler, then the archbishop of Baltimore, and attended by Blessed Teresa herself, James was among the throngs who waited outside to catch a glimpse of the diminutive woman that many believed – rightly, it turns out – was  a saint.
“Mother Teresa is a beautiful woman and she did a nice job,” James said.
Influenced by the saint and her followers, he converted to Catholicism about six years ago.
“God wants me to be here,” he said. “God willing, I told the sisters and God, I want to die here – that’s my wish.”
Sister Cecil Ann pointed out a list on the wall with 122 names – all those who died at the Gift of Hope. There are far fewer deaths today, she said, thanks to advances in modern medicine.
The residents’ daily lives include prayer and outings, such as to Washington, D.C., and the Shrine of St. Anthony in Ellicott City. Dedicated volunteers join them for card games and conversation.
The sisters’ ministry is far from limited to the Gift of Hope. They teach the catechism at Our Lady of Pompei Church in Highlandtown and minister to prisoners in the Baltimore City prison complex. In groups of two, they visit homes throughout St. Wenceslaus Parish, meeting families and shut-ins alike, sometimes cleaning homes and handing out school supplies.

He was present at the opening of the Gift of Hope, and he served as the chaplain and confessor to the Missionaries of Charity when they were based at the National Shrine of St. Alphonsus Liguori in Baltimore.
“I felt woefully inadequate, every time I went there,” Father Roach said, describing his ministry to sisters, each of whom owned a shopping bag of possessions and three sets of clothing, maximum. “Your mediocrity hits you in the face.”
Still, he remembers the time as “absolutely amazing” and “one of the great honors of my life.”
The walls of the Gift of Hope are festooned with photographs of Blessed Teresa (Father Roach remembers her ordering her sisters to “take that down” during her 1992 visit) and images of Jesus and the Blessed Virgin Mary.
Crucifixes in the Gift of Hope are accompanied by the phrase “I thirst,” one of Jesus’ final utterances from the cross.
Sister Cecil Ann explained that the sentence describes the Missionaries’ of Charity objective, “to satiate the thirst of Jesus on the Cross for the love of souls by working for the salvation and sanctification of the poor.”
Also see:

Mother Teresa knew what being unloved felt like, priest says