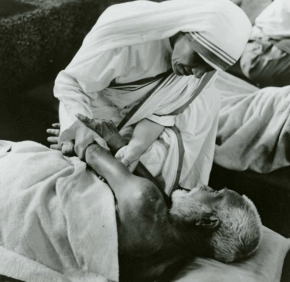 By Erik Zygmont
ezygmont@CatholicReview.org
Twitter @ReviewErik
While her extreme and unprecedented dedication to the poorest of the poor was the main impetus behind her growing fame in the 1970s, there was, even then, something more to the buzz that surrounded Blessed Teresa of Kolkata.
“She had a quiet, spiritual aura that enveloped her and enveloped the people with her,” said School Sister of Notre Dame Kathleen Feeley, who, as then-president of what is now Notre Dame of Maryland University in Baltimore, hosted the soon-to-be-canonized founder of the Missionaries of Charity in October of 1975.
“It was mysterious, I think,” she added. “It affected people; it touched people.”
Sister Kathleen had invited Blessed Teresa to Notre Dame as part of a speaker series for International Women’s Year, an observance declared by the United Nations.
“I knew if I could get Mother Teresa to come, everybody else would be interested in getting on our panel of speakers,” Sister Kathleen remembered.
Thanks to the future saint’s friendship with School Sister of Notre Dame Mary Georgianne Segner, then the general superior of the order, it was relatively easy to arrange the engagement, which was to be incorporated into an already-scheduled three-day visit to the U.S.
Many of Blessed Teresa’s small actions from the afternoon of Oct. 25 through the following morning impressed Sister Kathleen, including her immediate request to be directed to a chapel, where she knelt and prayed for a couple minutes.
“She was a woman of great depth who would be meeting people all night, and she wanted to center herself on God,” Sister Kathleen said.
Later that evening, she ushered Blessed Teresa into the auditorium through the back door. As they stood outside, they heard the din of conversations and laughter, but an immediate silence fell over all as soon as the door was opened.
“They couldn’t have seen us,” Sister Kathleen said, alluding to other reasons for the sudden hush.
What followed was “a very typical Mother Teresa talk” focusing on the poor, service, love and the importance of overlooking nobody.
“It was kind of what I had read she had said before, more or less,” Sister Kathleen remembered.
According to an Oct. 31, 1975, story in the Catholic Review, Blessed Teresa told the audience the poor are “the hope of our salvation.”
“The hungry are not only those who are hungry for bread,” she said, “but those who are hungry for understanding love, to be somebody to somebody. This kind of poverty we have all over the world.”
The Eucharist, she said, is her greatest source of strength because “Jesus in the appearance of bread is Jesus in the broken bodies of the people we are touching – not serving, but loving.”
When the floor opened for questions, the audience delved more deeply into the future saint’s personality and motivations.
A fellow School Sister of Notre Dame, Sister Kathleen remembered, stood up and told Blessed Teresa that her influence had inspired her to consider giving up teaching in favor of more hands-on work with the poor.
“Only one asked the question, but I think it was on the minds of many,” Sister Kathleen said.
Blessed Teresa’s response surprised her.
“She said, ‘Continue to teach. Who will instruct Christ’s little ones if you don’t?’” Sister Kathleen recalled. “Her message was so clear.”
Some other questions touched on an ongoing debate among religious, some of whom were then beginning to see direct service to the poor as a “band-aid,” and were instead contemplating tackling the underlying roots of poverty, inequality and other social injustice.
“You know, she just answered it very well – You take what’s in front of you; you serve the people you see,” Sister Kathleen recalled.
“She didn’t want to change the world, but she did, in her own way,” she continued. “Not by legislation, and not by political action – it was personal, spiritual action.”
Blessed Teresa continued to answer questions, and Sister Kathleen got the sense that she would have answered all night.
“Again, it struck me that service was kind of in her DNA,” she said. “It wouldn’t have occurred to her to stop answering questions until people stopped asking them.”
At a reception following her talk, she stood at the door of the gymnasium and greeted each and every one of the approximately 900 people who entered.
At the end of the evening, Sister Kathleen led Blessed Teresa to her room, which was behind the chapel where 7 a.m. Mass would be held the next morning.
Sister Kathleen arrived for Mass at 6:30 a.m., thinking she would catch Blessed Teresa, but the chapel appeared empty. As 7 a.m. crept closer, Sister Kathleen wondered what was holding up her guest, and decided to go knock on the door to her suite.
She walked up through the pews toward the altar, and as she passed the first row, she saw Blessed Teresa sitting on the floor, her head below pew-level and hidden from Sister Kathleen’s prior view from the back. She had been there all along, praying silently.