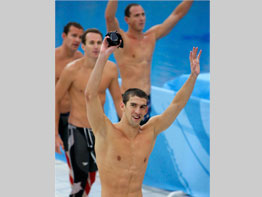 PHILADELPHIA – When Brendan Hansen was about 10 years old, he won yet another swimming race.

A woman came up to Hansen’s mom and emphatically suggested that she report her son’s times.

“I really had no idea of what she was talking about,” said Miriam Hansen. “I was like, ‘Why?’ I had no idea they were considered that good. I didn’t even know who I was supposed to report the times to.”

That was 17 years ago, and since that eye-opening moment when a mother began realizing that her son might have a truly significant gift as a standout athlete, Brendan Hansen – a graduate of St. Denis School in Havertown, Pa. – has become one of the world’s fastest swimmers.

At the 2008 Olympics in Beijing Aug. 17, Hansen became part of Olympic lore when he raced the second leg of the 400-meter medley relay that eventually cemented Michael Phelps’ feat as the first Olympian in history to win eight gold medals in the same venue.

Reached at her sister’s home at the Jersey shore, Miriam Hansen told The Catholic Standard & Times, Philadelphia archdiocesan newspaper, that Brendan “has been in pressure situations, but none like this.”

“All of the guys had so much riding on that race,” she said. “Fair or not fair, any little thing that could go wrong would have been considered a major event, so they were all under a microscope more than at any other time. That said, I think Brendan handled the pressure just fine.”

Miriam Hansen admitted that, because Phelps was trying to make history, capturing the gold medal was more a relief than euphoria because “nobody wanted to be the one who blew it. They were careful not to do anything wrong. That’s a tough way to do a race,” she said.

Though she had not spoken with Brendan at that point, she said her son Sean told her that Brendan reiterated that view. Though obviously pleased with winning his second gold medal (he also won gold in the medley relay at the 2004 Olympics), he felt relief more than anything.

Herself a 1973 graduate of Archbishop John Carroll High School in Radnor, Pa., Miriam Hansen lauded St. Denis School for her own education and those of her three children – Brendan, Sean and Megan.

“It’s a great school,” she said. “I loved working there. In the schoolyard, in the cafeteria, as a homeroom mom. … I have really nice memories. And Brendan loved it there, too. They were really good teachers. To this day, Brendan will say things like, ‘Good old St. Denis. Thank God they taught me basic, fundamental stuff that I still rely on.’”